Waiting on Wednesday is a weekly meme hosted by Jill from Breaking the Spine. The idea behind this meme is to highlight up and coming releases that we just can't wait to read.

This week's choice is Warped by Maurissa Guibord. I could give you plenty of reasons why I want to read this, but I'll settle for just one: Unicorns! (Need I really say more?) 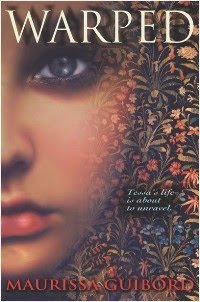 Warped by Maurissa Guibord
Summary:
Things get weird after Tessa Brody's father buys a dusty old unicorn tapestry at an auction. The wild, handsome creature woven within it draws Tessa, and frightens her too. One day she pulls a silver thread from the tapestry and releases the unicorn. Only he isn’t one at all.
He’s William de Chaucy, a young sixteenth century English nobleman with gorgeous eyes, a weird accent and haughty attitude to spare. Will was trapped in the tapestry by Gray Lily, a sorceress who stole the thread of his life and relies on its energy for her eternal youth. Now Gray Lily wants her unicorn back and she’ll do anything to get him.

If that isn’t bad enough “his lordship” de Chaucy seems to think Tessa is someone she’s not: the girl who trapped him so long ago in the forest. Despite the sparky chemistry between them he seems to have the strange idea that she’ll be his undoing once more. Maybe she will.

Because there’s a connection, an attraction to Will that Tessa can’t deny. She’s even beginning to dream about events in a forest of long ago. Or is she reliving them? But Tessa knows one thing for sure. She could never be some heartless twit of a virgin who would trap a unicorn.

This book is only being released in January 2011, so it's quite a long wait. Still, it sounds like a great read and did I mention that it has unicorns? :)
On a different note, I saw Eclipse last night and have to admit to being really surprised by the movie. I won't say more, because I'll have a review up later this afternoon (or early tomorrow morning for the latest).

Anyway, what's on your WoW for this week? Leave a comment and let me know so I can go and check it out. :)
Email Post
Labels: waiting on wednesdays
Reactions:

That one sounds really good, and I love that cover.

Romy @ Lost.in.Stories said…
This sounds so good, it's the first time I've heard of this book. I'll be adding it to my goodreads to read pile.

Dazzling Mage said…
Hehe, magic and prince-entrapment- I love! And the cover is so pretty!

Jan von Harz said…
I have always loved unicorns so that alone make me interested in this one. Love the cover too. Great Pick
June 30, 2010 at 2:41 PM

I just realized that you are from South Africa, hope that you have a lot of fun with the World Cup.
People here in Germany are going crazy over the game against Argentina.