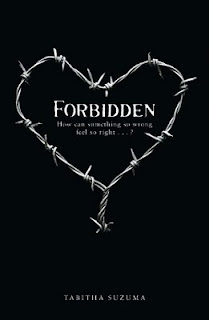 Forbidden
The unconventional and incestuous relationship between a brother and sister who really had no choice but to fall in love.

Forbidden by Tabitha Suzuma (Definitions)
17-year old Lochan and 16-year old Maya Whitely have never had the chance to have a normal childhood.

Between dealing with the emotional impact of a father who has abandoned them and a frequently absent and alcoholic for a mother, the two are forced to care for their 3 younger siblings, while at the same time dealing with every day things like school, homework and tests.

The world and the reality in which they live is a hard and uncompromising one but between supporting each other and trying to keep up the semblance of a normal family (in order to avoid coming under the radar of the social workers), the two siblings somehow manage to gradually fall in love.

It's a love that is not only forbidden, but one that has very little chance of surviving in a world where incest is not only viewed with revulsion, but where it's also illegal.

And no matter how right the wrong feels, the consequences of their love inevitably unleashes a devastating chain of events that no one could have foreseen.

I recently read a book called One Day and thought that it was the best book I've read this year. I was wrong.

In all of my life, I don't think I've ever read a book that has led me on such an emotional rollercoaster ride in much the same way that this one has.

Someone once said, and I'm paraphrasing here, that the books that are most worth reading are the kind of books that challenge our convictions and belief systems - and, as a self-proclaimed bibliophile, nothing challenges me more than reading a book that takes me completely out of my comfort zone.

Which is what this book did and then some more.

It's definitely a highly controversial and taboo subject that has most people recoiling in horror. Consensual incest? Would probably illicit a response that's even worse.

Yet for all of the subject matter, this has probably got to be one of the most exquisitely heartbreaking and hardest novels that I've ever read this year so far.

I believe that the power of this novel lies in the fact that the author manages to create such a desolate home environment, that the relationship between Lochan and Maya not only seems inevitable, but also incredibly believable. In some instances, I dare to say, even justifiable.

And that is what I found so incredibly unnerving.

On the one hand, I couldn't help but hope against hope that they wouldn't go down what surely is a self-destructive path for them and a very uncomfortable one for us, the readers; but on the other hand, I was rooting for them to carve out a little world for themselves and just to escape from every single thing that holds them back to find that little happiness that they so rightly deserve.

Did it bother me that I felt this way? Oh yes.

As someone who definitely does not condone incest in any form or manner, I found myself rooting for them, even when at the back of my mind the entire idea of the brother and sister as a couple left me shaken to the core .

But, here's the thing. The fact that I felt this way is for me, a testimony of just how well the subject was handled and the intention with which it was done.

I don't think that this book was written with the intention to shock or sensationalise a controversial topic (even though shock it does), but I believe that the author's intention was simply to tell a story about two fragile teenagers who were forced to grow up too soon in an insular world where the only thing they had to rely on and cling to, were each other.

The book alternates between both Lochan and Maya's point of view, where we are given glimpses into characters that are incredibly well-developed, tortured and written with such empathy, it makes your soul bleed.

I especially felt for Lochan.

On top of dealing with cooking, shopping for groceries, paying the bills, making sure that Kit, Tiffin and Willa (the younger siblings) are washed, dressed and done with the school work, Lochan also has a severe and debilitating social anxiety problem.

My heart just about broke every time I read about his intense struggle to talk to anyone else besides his family.

The oldest, yet by far more fragile than Maya, he seemed to me the most broken out of the lot, and throughout the novel you can't help but have this sense that he will never, ever have a happy place in the world. It made my heart ache just to experience his torment.

As far as female protagonists go, Maya was instantly likeable. She's the kind of character you would trust to look after your kids and has a source of strength within her that is incredibly compelling.

Yet, she's no more immune to feelings of torment and guilt than Lochan is, and the knowledge that these characters know that the love they have for each other is taboo on so many levels, afflict them with an incredible amount of guilt and shame.

A word of warning to everyone who will be reading this: the mother in this book is probably one of the most despicable book characters that I've ever come across.

The blatant parental neglect and her sloppy, drunken binges that she subjects her children to disturbed me to no end and only made this book even harder to read than it already was.  I wanted to strangle her throughout the novel.

I have to admit that this is not the kind of book I would recommend to just anyone. It's aimed at young adults, but I do think mature readers would be more suitable due to the fact that the book does contain a fair amount of descriptive scenes of a sexual nature.

What I will say though is that this book is one of the most emotionally intense books I've ever read.

Reading this feels a bit like someone stabbing you with a knife and stitching you up, only to have the process repeated when you turn the next page.

The writing is beautiful, brave, completely absorbing and will stay with you long after you've turned the last page. And yes, it will make you cry. More than you'll expect and harder than you'd imagine.

Leanna Elle said…
Wow! Great review. This one definitely sounds emotionally intense. I haven't heard much about it before reading your review, but it certainly sounds like an interesting, if difficult, read.
September 28, 2010 at 10:23 PM

StephTheBookworm said…
Wow, I hadn't heard of this one before but it sounds like quite a book! I'm all about controversy in my reading, so I definitely plan on picking this one up! Thanks for sharing!
September 29, 2010 at 4:33 AM

Melissa (i swim for oceans) said…
I've heard of this one, and the premise kind of struck me as something I'm not sure I could handle. That said, perhaps one day I'll pick it up based purely on excellent writing. Great review! :)
September 29, 2010 at 5:23 AM

brandileigh2003 said…
Great review. I really loved this book. Like you, Tabitha really had me wishing that they could find a way to live and express their love.
I did not want the ending or expect it, and it has stuck with me.

Michelle Fluttering Butterflies said…
Yes. This one was great and it really drew me in.
September 29, 2010 at 9:17 AM

StefanieEmmy said…
This is a great review! I don't know yet if I could handle this kind of story - it seems quite challenging for the reader, but the book is definitely on my wish list.
September 29, 2010 at 9:45 AM

Aisle B said…
I'm going to not this one down since reading your review. Like you I'm hesitant on the topic of incest yet at the same time remember how Petals of the Attic raised the same subject. I realize the comparison is completely off, its similarities being siblings whose love broaches a the largest taboo of our society.

Going to go see if I can get this one next, and I'm also going to look for One Day.

Great review. Your argument for the book won me over despite the very subject being somewhat "ose".
September 30, 2010 at 12:00 AM

Chrissie said…
Great review! I also found this a very emotional and difficult book to read, but I'm so glad that I did read it. It is a story that sticks with you for a long time after you have read it.

I absolutely hated the Mother and for me her complete neglect of her children was the most shocking aspect of the book.
September 30, 2010 at 1:21 PM

Splendibird said…
This is such a well thought out review. I have read a lot of positive things about this book but have been avoiding it as it seemed like it would be pretty depressing. However, after reading your review I am too curious not to pick up a copy.
October 5, 2010 at 9:45 PM

Julie said…
What a wonderful review! Although a looooonnng time ago I read V.C. Andrews' "Flowers in the Attic", which also deals with an incestuous relationship, this review makes me truly feel that this book would be a book that makes me think ... and feel ... which is what a great book should do. It's going on my GoodReads wishlist right now!

Miss Page-Turner said…
*sigh* I'm in love with your review!Just reading your thoughts on Forbidden could make me cry again. Forbidden is such a powerful book and I also think it's because Suzuma handled the topic of incest so well. I often catch myself thinking about the story and ending again, although I finished it a week or so ago. Forbidden is definitely one of my all time favourite reads and I am glad you love it as much as I do!

If you want to read my review, you can find it here:http://misspageturnerscityofbooks.blogspot.com/2011/06/book-review-forbidden-by-tabitha-suzuma.html
June 30, 2011 at 3:30 PM