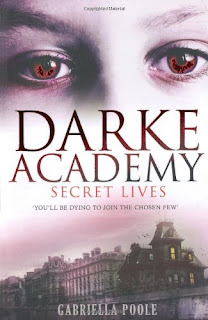 Darke Academy
An exotic and elite academy with dark secrets, a scholarship girl waiting to unravel them, and a brooding boy who may prove to be the most dangerous distraction of all.

Darke Academy  by Gabriella Poole (Hodder Children's Books)
Cassandra Bell never thought she'd be attending Darke Academy. For a scholarship girl like her, the school is everything she could have dreamed of and everything that she's not. Intimidating, beautiful and elite.

Just like the rich, preppy brats who all inhabit its hall rooms.

Yet, for an established and ostentatiously lavish boarding school, Darke Academy, true to its very name, is bound to have its share of dark secrets.

For example, who are the Few?  What are the secrets they guard so jealously?  And what happened the previous year when a scholarship girl like herself died in mysterious circumstances?

One thing is certain... Cassie, hell bent on finding out just what the Few have to hide, will need to have her wits about her if she wants to make it out alive without being irreparably damaged - or killed - in the process.

Review:
There are many books where the cover often misleads you into thinking that the contents of the book are harrowingly awful. Now, I usually have a love hate relationship with books like these because I know that my judgements of covers always tend to lead me into ignoring books that end up surpassing my expectations.

It was no different with this book.

It's not that I dislike the cover per say (I have seen far worse), it's just that the thing is with this cover, is that it's so easy to overlook this book amidst all the much better book covers out there (which ironically enough, sometimes tend to end up being awful reads).

And because I considered this book to be so incredibly forgettable, I left it on my shelf for a good couple of months.

I can't say what it is that motivated me into picking this up, but I'm happy to say that I am glad that I eventually got around to it. After all, there's nothing better than having a book prove you wrong when your expectations of it weren't all that high to begin with.

Anyway, on to the actual contents of the book.

I'd be the first one to admit that the premise of the novel is not a unique one, but there is something so infinitely readable and accessible about this book, that you can't help but forgive (and forget) the fact the concept is one that has been done before.

The vampire genre may be overcrowded, but Poole's Darke Academy: Secret Lives (Book 1 in the series) provides a rather unique and fresh spin on the genre that quickly makes you sit up and take notice.

The interesting thing about Darke Academy is that it is a school that moves around the continent and is never based in one location for a long period of time. I love the idea behind this because it complements Gabriella's exotic, descriptive and very lush writing perfectly.

It also means that in the next instalments of this series, we can definitely expect to experience the fabulous worlds of different cities in each book. This makes my travel-loving heart very happy.

In Secret Lives, the vivid and resplendent culture and backdrop of France comes to life.

There's a pulsing beauty and an undeniable air of arrogance of those that only know how to live the charmed and glamorous life.  For scholar Cassie, it's a lustrous place which oozes with mean girls and academy snobs, but at least offers some form of comfort and welcome in the forms of Isabella and Jake.

I loved the fact that these characters were not your typical run-of-the-mill blond-haired, blue-eyed Americans (no offense intended to anyone out there), but rather a wealth of mixed cultures.

There's Cassie, an English girl, Isabella a fiery-tempered Latina, Jake, the all-American boy and amidst the rest of the vibrantly different cultural backgrounds, is the main brooding love interest, Ranjit Singh - the delicious boy of Indian descent.

For me, this eclectic mix of characters adds a wonderful dimension to what I think might have ended up being a potentially very bland novel.

Character wise, I really, really liked Cassie. She's a grounded scholarship girl who knows where she comes from and knows exactly how she got into the elitist Darke Academy, yet doesn't allow the snobby and popular girls to get to her.

In fact, the gutsy girl talks back to them. (Hooray for a character who actually has a backbone - and a strong one at that too). Also, I loved the fact that while she was instantly attracted to Ranjit, she was actually almost borderline rude to him (Again, very refreshing).

My one complaint would have to be how the relationship between them developed. I don't think there was enough time or room for them to actually get a real feel for each other besides the obvious attraction-antagonism feelers between the two.

I suppose we could attribute this to the fact that the author is leaving room for relationship growth in the next novel, but I still feel as if there could have been more interaction between the two of them in order for a possible relationship to seem more plausible.

Then, of course, there is the supernatural element to this novel. I really wish I could say more without giving it away, but I can only tell you that you shouldn't expect any of the typical vampire lore you come across in most books.

Here is absolutely none of that in this book.

In fact, I'd hazard a guess and say that the things I've learnt in the first installment of this novel, is just a taste of what is still to come.

Initiation rituals, strange and dark rites, gloomy catacombs and a sinister method of feeding... this is just the beginning of the journey for Cassie and her friends.

It's the start of a fantastic book series, and despite the minor hiccups I had with this novel, the gothic and atmospherically descriptive writing, combined with the rather unique spin on vampire lore, makes this novel an alluring and transfixing read.

I can't wait to read Darke Academy: Blood Ties - which is the second book in this series.

Jan von Harz said…
All I can say is I really want this book. I love that this book is not your typical "run of the mill American academy and that there is such a diverseness to the characters, I am also quite intrigued by the fact that the school moves...very cool. This was one fantastic review and I am putting this one at the top of my wish list.
November 25, 2010 at 10:12 PM

Jenny said…
I love your reviews Tammy, there so thorough and give me such a good feel for the book:) And a big YAY for a female protagonist with backbone! I like Cassie already. I do have to agree with you on the cover of this one though, it does nothing to really attract me, especially among YA books where there are so many amazing covers. Love when a book surprises me with it's content though:) I'll be looking forward to reading this one!
November 26, 2010 at 5:45 AM

Leanna Elle said…
I really like the sound of this one, even though, like you, the cover doesn't do much for me!

Aisle B said…
Sounds like it got your stamp of approval and the review outlined the whys and why nots of this vampire tale. Well done and another reason why I will go broke if I buy another book. Thanks my pixie girl and PS snow came and sent some via moonlight to your little end of the world :)
November 28, 2010 at 9:47 PM

Blueicegal ♥ said…
Oohhh sounds like something quite different from my normal day to day read, might just give it a go, thanks girly! :P
November 29, 2010 at 2:35 AM

Michelle Fluttering Butterflies said…
That's interesting, with the school moving to different locations. I didn't know that. I had this book once but I gave it away as I thought it wouldn't be a book for me. Perhaps the cover had something to do with that?
November 30, 2010 at 4:38 PM