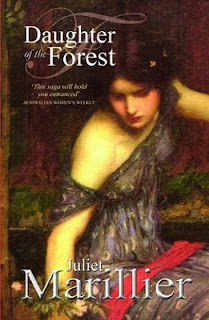 Brave, tough, young and old…. we all love fiction characters for different reasons. I've decided to share 10 of my favourites.

Seeing as I enjoy all types of genre's, this list is a mix of YA and non-YA fiction heroines. I will however be doing one with strictly a YA focus in a future post.
1. Sorcha - Daughter of the Forest
After reading Daughter of the Forest, Juliet Marillier has quickly managed to become one of my new favourite authors.

Blending Celtic mythology, fantasy and beautiful prose, the worlds she manages to create are nothing short of magical.
Now add to that a strong heroine who survives what life throws her way against all odds, then you'll have the basic idea just what forms the backbone of Sorcha's (the protagonist of the novel) character.

I loved her for the sacrifices she willingly and not-so willing had to make and for giving up almost everything she had in order to save her brothers.

I don't think any description can really do this character justice, but I can tell you that if she's number 1 on my list, then there is a very, very good reason for it.
2. Elizabeth - Pride and Prejudice
Ah, what would this list be without Elizabeth?

I have yet to come across someone who hasn't read and fell in love with the brave, forthright and courageous woman who lived in a time when money, social status and high society were considered far more important than love and happiness (actually, THAT pretty much sounds like today's society, but that's another column for another day).
Oh, she's not without her flaws, but one has to admire her strength and resolve as well as her steadfast refusal to wed someone that she just doesn't love and risk being shunned by all and sundry. She's a timeless heroine so many of us love and wish we could be. Plus, she gets Mr Darcy doesn't she? You don't need any more reasons than that.

3. Sophie - Sophie's world
Sophie's World is quite the gem of a novel. The heroine, Sophie? Even more of a gem in her own right.

Pairing up a 14-year old girl and philosophical teachings seem like such a bizarre combination, but Jostein Gaarder (one of my favourite authors) manages to make this combination work explosively well.
Sophie is precocious, inquisitive and refreshingly interested in knowing how the world she lives in works. I found it very easy to engage with her simply because she's so willing to be taught and to broaden her horizons and eagerly laps up anything that is thrown her way. Possibly naïve, but still.

I like and admire her for wanting to pursue knowledge instead of going after life's little quick fix little pleasures. I'm also possibly quite biased towards her because I have soft little spot for philosophical topics.
4. Hermione - The Harry Potter Series by J.K. Rowling
I'd give a brief little introduction about the book series, but I'm pretty sure that most of you must have read or at least heard about the Harry Potter series (If you haven't then where have you been?).
What's not to love about Hermione? She's book smart, magic-smart, witty, incredibly intelligent, brave, courageous and hooks up with the very loveable, shaggy  and mop-haired Ron (that's how I picture him). Totally defying conventional stereotyping, which is why she is such a winner in my books.

Gifted with an exquisite talent for cooking, Tita is the youngest of 3 girls who is forbidden the right to marry and is forced to stay behind to tend to her cruel and overbearing mother.
When she falls in love with Pedro, she's forced to watch as her mother hands her eldest daughter to him. For the next 22 years Tita's pain is woven into every meal she cooks, effusing and affecting everyone else's emotions in the process.

Tita is one of my favourites simply because she endures and survives 22 years of hell and deals with her life, losses, longing and love all through the one outlet that helps her to get through it all - cooking.
6. Clara - The House of Spirits
Isabel Allende has always been one of my favourite authors - and it's not just because of the lyrical prose or the presence of mystical and magic realism elements that are so prevalent throughout her novels, but because the heroines in her novels radiant such a strong sense of self-worth and confidence (even in the midgst of trial and tribulation) that reading their stories are such a joy.
As the matriarch in Allende's generational story about four women whose lives are inexorably intertwined and linked with one, Clara is the elusive and mysterious clairvoyant, who foretells family tragedy and shapes the fortunes of the house of the Truebas.
Although the story is told from alternative viewpoints, the voice which really stood out the most for me was Clara's. Her strength and undeniable love for her family helps her to keep her  family household together despite and in spite of the variable amount of forces try to drive their order apart. I loved this even more than Daughter of Fortune.
7. Jane  - Charlotte Brontë
Jane Eyre is another one of those stories that simply don't need an introduction.  Most of us adore the handsome (ok, I am tremendously biased towards him) and brooding Mr Rochester, but so many of us look past the highly spirited Jane whose strength of character, back bone and acute sense of right and wrong shines throughout the novel.
One simply has to admire a character who has often been trampled upon, but whose fighting spirit and sense of integrity makes her one of those characters whose true beauty really radiates from within.
8. Maya - Forbidden
Anyone who has read my review of Forbidden, will know that I've been raving about this book to no end. Without going into too much detail, the book tackles a rather controversial topic (consensual sibling incest), but does so in an incredibly touching, non-sensationalistic and graceful manner, that you'll just warm to the characters and their story instantly.
As far as female protagonists go, Maya (the sister in the story) was instantly likeable. She's the kind of character you would trust to look after your kids and has a source of strength within her that is incredibly compelling.
The ending of the story (and this is really what makes the novel) is what really made my heart break  for her,  and I really, really applaud and admire her for the choice that she made, because I know I wouldn't be able to do what she did at the end of it all.
9. Clary - The Mortal Instruments series
I adore Clary. She's ballsy, brave, gutsy and incredibly smart. Not only that, but she is an amazingly well-developed and mature character for someone who is so young.
I loved the fact that she was so fearless even though more often that not, that fearlessness often put her in harm's way. And that she didn't think twice about risking her life for the sake of those she loved. She's every thing that I wished I could have been when I was her age.
10. Chiyo/Sayuri -  Memoirs of a Geisha
It's been a good while since I've read this book, but for all the time that has passed since I've read this book, Sayuri's character has been a character that has stayed with me up until today.  As a young girl, Chiyo (who becomes Sayuri later on), is adopted and sold into a life of servitude where she will eventually be trained to become a geisha.
Seperated from her sister, she has to endure a whole spate of roadblocks, obstacles and misery before she can even begin to remotely get somewhere in life.
She's not an easy character to love, but for me character growth and development is incredibly important and watching and experiencing her grow up, encountering setbacks and becoming a victim to cruelty, jealousy was at once riveting and heartbreaking.
Most importantly? Getting to share in the elation of overcoming all that to carve a future for herself in an environment where women aren't altogether truly valued.

That's my mash-up list of fabulous female fiction characters I love. Who is your favourite? I'd love to know.
Email Post
Labels: book features
Reactions:

Melissa (i swim for oceans) said…
OMG I love you for this post! Not only did you put Hermione on this list, but you put Sayuri on it, too! Memoirs of a Geisha has to be one of my all-time favourite books, and Chiyo/Sayuri is a character that will always ring true and beautifully for me. I love this list :)
November 30, 2010 at 5:20 AM

-k said…
I loved Daughter of the Firsed but my favourite of the series is by far Son of the Shadows. There's a new books that goes with that trilogy too. But in general, I love Marillier's writing, whether it's her adult or YA fiction.
November 30, 2010 at 5:56 AM

Jan von Harz said…
Great list and I especially agree with you about Hermione. Jane Eyre too.
November 30, 2010 at 9:20 AM

Michelle Fluttering Butterflies said…
I absolutely adore posts like this! I've read most of the books that our heroines are from, but I probably would have never remembered to include them! But it's wonderful that you have - I really loved Clara from House of the Spirits (Isabel Allende being one of MY favourite authors too!) and Tita from Like Water From Chocolate..
November 30, 2010 at 4:41 PM

Jenny said…
Really great choices Tammy! I've always loved Elizabeth from Pride and Prejudice as well, she's such a great balance of characteristics. I love Hermione as well, I was just like her in high school:)
November 30, 2010 at 6:01 PM

Straylights said…
Harry Potter would have SUCKED with out Hermione! Just sayin'

I totally love Sophie from Hex Hall, Andi from Revolutions (SERIOUSLY HURRY UP AND READ THIS!!! :D ) and Karen Murphy from The Dresden Files
November 30, 2010 at 11:59 PM

Aisle B said…
What a great list for heroines. Elizabeth from Pride & Prejudice gets my vote hands down. Can't wait to read Forbidden to delve into Maya's worth.

Ahhhhh so much to read.. so little time!

CouncilMemberEK said…
Have you read anything by Tamora Pierce? She is AMAZING!!!! Strong female heroines, fantasy, and a dash of romance (as long as it doesn't interfere with saving the world. Of course)
January 30, 2011 at 11:34 PM