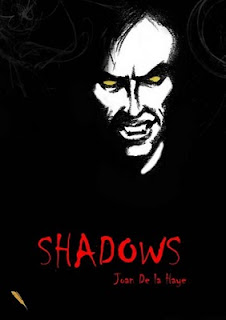 Shadows
Dark, twisted and creepy, Shadows will take you out of your comfort zone and keep you glued to the pages of the book, regardless of whether or not you want to.

Shadows by Joan De La Haye
After losing her father to suicide, Sarah finds herself on the brink of losing her sanity. Haunted by the ghosts of her family's pasts, she finds herself in a new kind of hell when she starts experiencing a series of graphic, violent and bloody hallucinations.

As if that wasn’t bad enough, the hallucinations also bring about a new form of torment in the form of a demon that refuses to leave her side.
.
When seeking help from her psychiatrist friend Michael Brink doesn't quite work out and invariably leads her to stabbing her cheating rat of a boyfriend, a catatonic Sarah is institutionalised and forced to confront and deal with the horrible truth about her father's death.

Of course, Jack, the demon responsible for both her father's suicide and her bloody hallucinations uses this to his advantage as he continues to make it his business to torment the living daylights out of her.

Unfortunately for him, he doesn't count on the fact that, unlike her father, Sarah simply refuses to kill herself.

Still, finding her way out of the darkness is no easy feat - and in her struggle to hold on to both her life and her sanity, Sarah makes a few startling discoveries that alters her life completely.

My thoughts:
Ok, before I start with this review I’m going to come out and straight up admit the following: I am not a big fan of horror.

Blood and violence is not something that necessarily frightens me, but add the gore and creep factor and this book wimp runs to the opposite end of the genre spectrum.

Nevertheless, when I posted a tweet about looking for books that would take me out of my comfort zone, Joan de La Haye, author of Shadows, offered to send me a copy of her book. No one was more surprised than me when I actually said yes.

And no one was also more surprised than me when I actually ended up actually really enjoying this book.

For me, the mark of a really good read (regardless of genre) is when you find yourself continuing a story even though the characters don’t endear themselves to you.

The characters that Joan creates are probably amongst the most disturbed characters I’ve ever been introduced to.  They range between being clingy and needy to being downright warped, ruthless and vengeful.

And I’m not even talking about the demon (oh, we’ll get to him later, don’t you worry).

We meet Sarah when she’s at her most fragile. She’s just lost her father and is in desperate need of any kind of distraction that will help lessen the pain. Naturally she turns to her boyfriend Kevin, who as she soon discovers, is far from being someone who is worth her time or attention.

What’s interesting about this is that his story forms another interesting part of the novel which introduces his sister Carol and his lover Denise (who also happens to be involved with Carol).

These characters are broken, twisted and damaged characters who are haunted by shadows of their pasts, misguided grievances and are poisoned by hate.

These are also characters that are altogether unlikeable.

As the story progresses, a shocking and incestuous plot unfolds that quickly spirals out of control and leads to events that no one could have predicted.

The presence of the demon Jack, was definitely the focus and highlight of the story for me. He is the character born out of the deepest and darkest nightmare realm and the one you wouldn’t wish upon your family, friends or your enemies.

The book cover, although not a favourite with me, is certainly an accurate portrayal of the dark, demented, cruel and taunting demon who haunts Sarah day and night, and the things he does is nothing short of bloody, violent and horrific.

Yet, for all of this, at some point, in spite of what he does, you as a reader can’t help but warm to his character.

Is it even possible to change your mind about an evil creature who has done nothing but inflicted physical and psychological damage on an already fragile person’s mind?

It is with this book.

For all the stark, crispness of her writing, Joan de la Haye manages to make you believe that the demon in some ways has more redemptive qualities than the humans in this story.

The development in Jack’s character is definitely something unexpected and leaves you questioning who the real villains are in this story.

Joan has created a character who is definitely no hero, but who makes you see beyond black and white and reflect on just how cruel humans can be to one another. To sum it up in a quote, here’s what Jack has to say:

“What?” he asked. “Demons have feelings too, you know. Besides, I didn’t do that to her.  You humans cause each other far more pain than I, or any of my kind, could ever hope to. It makes you all the more interesting and so easily corruptible.”

And this is what made the novel worth the read for me. This book wasn’t simply just a darkly, entertaining horror read.

It was more than that. It was a story written with substance and profound insight into the darker nature of the human psyche.

The ending of the book? Will no doubt leave you satisfied, and will surely make you shudder at just how badly we as humans often treat each other. If Joan keeps writing these kind of books, well, then it would be safe to say that she has just convinced me to branch out a little more into this genre.

If you’re a fan of horror with substance, then I’d definitely recommend Shadows. It has the creep and gore factor, twisted characters and is fully immersed in darkness. All the right kind of ingredients for a horror read if you ask me.

Plus, you have to meet Jack. You’ll like him. I promise.

It’s not an easy read, nor do I think it is meant to be, which is why the book is all the more worth reading. And did I mention that you get to meet Jack?

Made you curious, didn’t I?

Karen C said…
I am reading a horror at the moment too, which is totally not like me and I think I'll give horror a wide berth for the next few months as this book I'm reading is frightening the pants off me!

brandileigh2003 said…
I will have to remember when I am looking to get out of my comfort zone.
Brandi from Blkosiner’s Book Blog
January 9, 2011 at 4:37 AM

Melissa (i swim for oceans) said…
That cover leaves a lot to be desired, in my humble opinion, but your review leaves me wanting to know more! I'm totally adding this to my list. Great review! :)
January 9, 2011 at 5:00 AM

Anonymous said…
Thank you so much! Am really glad you enjoyed it. You were very brave and the bravery paid off.
January 9, 2011 at 10:57 AM

Aisle B said…
OHhhh just he cover gives me the chills... something along the lines of the Joker from Batman effect. Old time evil caricatures with dark intentions. Pixie girl you've made me add this one to my list of reads. Arghh don't know how I'm going to bypass the husband's book buying ban again... hmmm will come up with a way.

Jan von Harz said…
I am like you I love a good creepy story and this sound fantastic. I am definitely curious how you could actually end up liking the demon. Have to check this one out.
January 9, 2011 at 4:39 PM

THE SCRAPPIN TIMES TEAM said…
i read the book, and i think your review sums it up perfectly!

i also really enjoyed the book, in spite of myself. it is SO not my typical read.

it is well written, and the story and characters do stay on your mind for weeks after you finish the book.
January 9, 2011 at 5:08 PM

Leanna Elle said…
I'm with Melissa on the cover - it wouldn't encourage me to pick up the book! I used to read a lot of horror as a teenager. In fact, that's pretty much all I read. I haven't read any in ages though, apart from gothic horror.
January 9, 2011 at 9:38 PM

Straylights said…
I think I might be the only one who totally LOVES this cover. Thats okay though ... :-/ He looks so evil! Me likey. I saw on goodreads that it's getting a new cover though so booo. No just kidding, the new cover looks good too. This book sounds right up my alley! I think I'm gonna have to look around for it :D
January 12, 2011 at 2:43 AM

Anonymous said…
Thanks! I also love the old cover, but then I am slightly biased. A very good friend of mine designed it for me. It'll be re-released with the new cover at the end of January as an ebook and then as a paperback a couple weeks later.
January 12, 2011 at 12:11 PM

Jenny said…
Wow, nice review Tammy! I haven't heard this one and I'm so glad to see that even as someone who's not a fan of horror (I'm not either) you still really enjoyed it. And you've definitely piqued my interest in Jack, I want to meet him now!
January 12, 2011 at 5:42 PM

Michelle Fluttering Butterflies said…
Wow, that is one terrifying cover. And yeah, I'm sure that did take you out of your comfort zone. I think it's so far out of mine that I wouldn't be able to see my zone standing where this book is. *shudders* but I'm glad you enjoyed it :)
January 13, 2011 at 4:25 PM