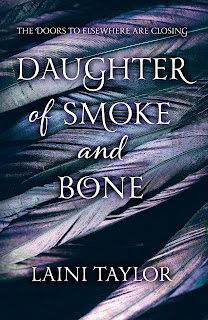 In the months leading up to the book's release, there's been a massive amount of hype behind it.

Normally I go out of my way to ignore hyped-up books, but when I read the synopsis of the book, even I couldn't help but be swept up in the frenzy that this book has created. When I saw the various book trailers for the book, I fell even deeper in love.

And boy, does this book live up to the hype or what?

Daughter of Smoke and Bone has got to be one of the most beautifully written paranormal fantasy novels I've read in a long time. In fact, it's such an incredible read, that no amount of words I could conjure for this book review, will ever be able to describe just how incredible this book is.

Everything about this book drew me in.

It's a book that is truly and entirely in a league of its own and one that had me gushing in wonder at the sheer fantasticalness of it all.

Let me try to explain.

The first book in a trilogy, Daughter of Smoke and Bone tells the story of 17-year old Karou, an art student who lives in Prague.

Seemingly normal (apart from her bright blue hair, which grows from the root), most people don't realise that she lives her life with one foot in the human world, and another foot in a realm where monsters and mythical creatures (known as chimaera) reside.

It's in this world where she spends most of her time running errands for a mysterious creature, simply known as Brimstone. Between buying and collecting teeth from grave robbers and murderers to hunters and other unsavoury characters, Karou can't help but wonder just how she ended up in the Elsewhere world that she lives in.

Tormented by the knowledge that she has no real identity or past to speak of, Karou's search for answers lead her to a world where the seraph (the angels) and other chimaera-like creatures have been engaged in a bloody war for eons.

Along the way, she'll discover that love can develop across enemy lines, uncover the secret behind the wishbone that Brimstone refuses to allow her to touch, and learn that she may be more than just human.

I'm only going to say this once:

If you are only going to read one book this year, make sure that it's Daughter of Smoke and Bone. I envy many writers their talent, but there are few authors whose books I wish I had written myself.

It falls in both categories.

I believe that the power and tremendous accomplishment of this book lies in the fact that Laini Taylor's writing is so beautiful, so vivid and so full of phantasmagorical imagery, that it could make any person whose feet are firmly grounded in reality, believe in the world of Elsewhere that she's created.

Her prose is incredibly sensual and very dreamlike, and the world she builds within the book, is nothing short of spellbinding.

Filled with plenty of mystery, dark magic and secrets, the settings jump seamlessly from country to country, and one realm to another - making you wish you could travel to every single place she describes.

Think in terms of dealing in wishes and of leaping through doors that take you anywhere you want to go, but which always lead back to one place.

Envision beautiful angels and gothic restaurants, while simultaneously trawling through the blanketed-with-snow streets of Prague.

Read all about art, grave robbers, and the colourful streets of Morocco (amongst other fantastical descriptions of other countries).

But mostly, think about the girl with bright blue hair and the boy with amber eyes; both who come from two opposing worlds, forbidden, but destined to love each other.

Karou, with her blue hair is an interesting character. She's incredibly self-sufficient, independent and streetwise.

I love characters that are artistic, and Karou, with her flair for drawing the exotic and unusual, really had me rooting for her from the start.  The fact that everyone who knew a little about her past, refused to tell her, only made her more interesting of a mystery to me.

Things become really interesting when she has a run in with the Angel warrior, Akiva, whose intense amber eyes instantly intrigue her, even though every single one of her senses are on instant alert.

What follows is a slow-building and smouldering romance that may have its roots steeped in the past, and may lead to the unveiling of secrets that could lead to the beginning of something much bigger than Karou could have foreseen.

Add dynamic and interesting characters (Karou's really one of a kind), blisteringly hot romance (Akiva the angel warrior is both fearsome and awesome, and his story is as interesting as Karous) and an intriguing plot line and you have one of the most absorbing and gorgeously written books ever.

I can't wait for Days of Blood and Starlight, the next book in the trilogy.

My final thoughts? Some books aren't just meant to be read. They're meant to be experienced.

Daughter of Smoke and Bone is one such book. Get yourself a copy now.

You won't regret it; I promise.

CarlyB said…
Yay, I'm so glad you loved this one, Tammy! It was one of my favourite reads of last year. Can't bloody wait for Days of Blood and Starlight!x
April 24, 2012 at 9:43 PM

Leanna Elle said…
Great review Tammy! When I first heard about this one I was afraid it would be a little bit too much fantasy for me, but I loved it. Taylor's writing is truly beautiful and I loved the setting of Prague - the Prague in this book actually made me want to go back to the city even though I didn't totally love it when I went there.

The Bee said…
At first I didn't pick this up mainly because of the hype... then that gorgeous cover beckoned! :D and am I glad it did :D http://www.youngadultbookclub.com/daughter-of-smoke-and-bone-by-laini-taylor-review/
May 4, 2012 at 7:54 AM