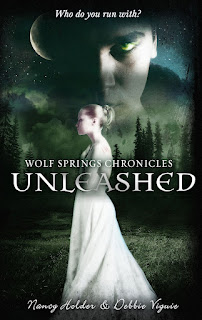 Unleashed
... because small towns always have secrets waiting to be discovered.

Unleashed by Nancy Holder & Debbie Viguie (Doubleday)
It's been quite a while since I've read a YA book about werewolves, so I wasn't really sure what to expect when I received a copy of Nancy Holder and Debbie Viguie's Unleashed.

The concept behind the novel is surely something we've all come across (in one form or another) before.

And while this in itself is not an issue, it does make the book a bit of a hard sell, as the synopsis doesn't give away much and suggests that there's nothing out of the ordinary about it.

Still, I decided to give it a go and found that, while I did have some issues with the book, I actually enjoyed it more than I thought I would.

When we first meet Katelyn McBride, we're introduced to a still grieving young girl, who, after losing her mother in an earthquake, is uprooted and sent to a small town in Arkansas, to live with her grandfather.

The village she's sent to is little more than a town that is completely off the radar, with many a hidden secret or two. As she slowly starts to adjust and make new friends (including drawing the attention of two irresistibly good-looking boys), Kat quickly comes to realise that life may not be so bad.

However, when strange things start happening, Katelyn can't help but feel that there's more to the remote little town than first impressions led her to believe.

When she gets to know the Fenner family (including the irresistible and highly unavailable Justin), she discovers that the family is more than your average small town family.

Between learning more about them and the town's mysterious history, Katelyn will find herself immersed into a world of unsettling truths and terrifying secrets; secrets that will change her in ways that she'd never have imagined.

Again, while there is nothing that I'd consider unique about Unleashed, the book is actually not a bad read.  In fact, this read kept me engaged enough that, at the end of the day, cliff hanger aside, I'd definitely give the second book in this series a chance.

One of the aspects I really loved about this novel, is Nancy & Debbie's writing.

I've never read a co-authored book before, and wasn't entirely sure whether the writing would work in terms of book flow.

When I started reading though, that fear was quickly put to rest as not only did the writing stream together seamlessly, but I could barely tell that it was written by two authors, instead of one.

The style and prose are effortlessly beautiful and have a way of engaging the reader for the most part.

There were times that I felt as if there was a lag that resulted in the novel lulling along at a slow pace, but I think that may have more to do with the fact that there were unnecessary plot hole fillers which detracted from the book, than with the actual writing.

As for the characters?

Kat is a likeable enough character. She really is.

One can't help but sympathise with her really. She's just lost her mom, and had to make a few sacrifices and be uprooted in order to move from a city she loves, to a small town that's barely on anyone's radar.

But, like the small town, she, for the most part, is not a very memorable character. In fact I suspect that the reason that I've been struggling with this review is because half of what I've read about her and what happens to her in the book, didn't stick with me for very long.

Still for the most part, I was championing for her and was glad to see her coming to accept living with her grandfather.

Her relationship with her grandfather was portrayed in a very realistic manner, starting off with in a rather uneasy and strained fashion and steadily growing and settling into a more relaxed vibe between the two.

Of course, what interested me the most were her interactions with Trick, and the Fenner cousins, Cordelia and Justin.

At this point I can say that, with his easy charm and charismatic persona, Trick is definitely a person of interest to me. I get the feeling, that for all of his easy-going ways, there's something about him that makes me think that there's a lot more to him than meets the eye.

Cordelia and Justin Fenner, with their family history, prove to be equally interesting. Between Cordelia's confusing treatment of Katelyn (one moment she's all sweetness, and the next she behaves like a total stranger wary of trusting anyone) and bad boy Justin's undeniable interest in her, Katelyn's hands are more than a little full.
The politics of Cordelia's family was something that also added a certain amount of intrigue to the novel, and between rivalry for affections and resentment within the family, I'm sure we'll be reading more about them in book two.

The paranormal element of Unleashed and the history behind it do make for some intriguing reading, but I felt as if it wasn't covered enough to give the book the extra oomph it needed to make it completely gripping. The werewolf lore is nothing new to me and for me, there were far too few moments that featured any wolves.

Still, I suspect that considering this is the first book, we'll probably find out more about the wolves and their history in the next novel. The other thing that will ensure that you'll be interested in reading the next book is the cliff hanger with which it ends with.

While I admit to not being surprised by the events, the added mystery about just how different Katelyn really is, definitely intrigues me to the point that I want to find out just who and what was involved in what happened to her.

Jenny said…
Hm. I'm not sure what to think of this one since there's nothing new or unusual about the werewolf mythology. Sounds like the characters are well done though, and that's normally enough to make a book worth reading for me! Thanks for the thorough review Tammy!
April 30, 2012 at 5:05 PM