Book review: On the Jellicoe Road 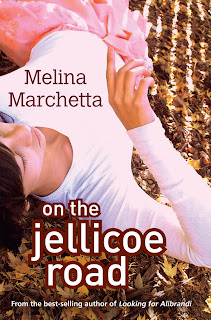 On the Jellicoe Road
How do you rediscover your sense of wonder underneath all the layers of grief, forgotten memories and fragmented pieces of history when all you have is a script that tells a broken story and a girl who has forgotten her past?

This wonderful author has a way of making the lives of her characters seep into your veins, filling your soul with a bittersweet ache that refuses to go away long after you’ve turned the last page.

And with On the Jellicoe Road, it proved to be no different.

In fact, I’d go as far as to say that this book proved to be an even better reading experience - such is the exquisite power of her writing.

Not only that, but the book wrecked me in a way that I never, ever expected it to, which is why the first thing you should probably know before I continue, is that Melina Marchetta is the queen of bittersweet reads.

But, for all of their poignancy, they somehow, by their very nature, also leave you filled with a hope that speaks of new beginnings and all of the blossoming opportunities that go hand in hand with it. And On the Jellicoe Road, is definitely one such book.

Yet, it doesn’t make for an easy read.

It’s not because it’s heavy and dressed in intellectual snobbery ( quite the opposite, in fact) but it’s because the book is like a puzzle; the pieces  all fractured and fragmented, and arranged in an order that at first appears to make no sense.

I know many have abandoned this book for this very reason, but here’s my advice to you: Puzzle pieces always start out with no structure, but when it starts taking shape, it transforms into a completed masterpiece.

Melina’s On the Jellicoe Road?

It’s not only a phenomenal riddle-like novel waiting to be solved by the reader, but it’s a reading experience that transcends its very own essence when the pieces finally fit together.

The book starts off at the scene of an accident, and hooks you in immediately:
“My father took one hundred and thirty-two minutes to die.

It happened on the Jellicoe Road. The prettiest road I’d ever seen, where trees made breezy canopies like a tunnel to Shangri-La. We were going to the ocean, hundreds of miles away, because I wanted to see the ocean and my father said that it was about time the four of us made that journey.”

These opening lines not only set the scene for a journey that will span over the course of twenty years, but also asks the following question posed by an integral character in the book (I quote):

“I remember asking, ‘What’s the difference between a trip and a journey?’ and my father said, ‘Narnie, my love, when we get there, you’ll understand. “

I didn’t think of it then, but only when I closed turned the second last page, did I realise just how important this question would be.

I also never thought that this book would have such a wonderfully, hopeful and heartbreakingly beautiful response to the posed question, nor how it would fit in with the theme of the book, which is why the impact of this book was all the more powerful for it.

Divided into past and present, present-day focuses on Taylor Markham, leader of the boarders at the Jellicoe School.

With her trademark devil-may-care, rebellious and tough-as-nails attitude, she reluctantly finds herself having to deal with boarding house issues, trying to negotiate her way around territory wars, which includes  dealing with Jonah Griggs – who is not only leader of  the rival gang, The Cadets  - but also someone she’s had an interesting history with.

Having been abandoned by her mother at a young age, Taylor rarely lets anyone in, and when Hannah, the caretaker and only person Taylor has ever learned to rely on disappears, the only thing she’s left with is a strange and unfinished manuscript which chronicles the story of 5 people who resided in Jellicoe years ago.

Taylor knows that in order to uncover Hannah’s whereabouts, she’ll need to try and make sense of the manuscript.

But with so much of her own story missing and being plagued by strange dreams that may be connected to the manuscript, she’ll need to finally confront all the memories that she’s been repressing  and try to find the mother who abandoned her On the Jellicoe Road so many years ago.

The manuscript Taylor tries to make sense of focuses on 5 people Hannah wrote about: Tate, Webb, Fitz, Jude and Narnie.

When we read this part of the story, we’re not quite sure why their story forms part of the overall arc and at first, one is almost tempted to skim through this part because you don’t really see a point to this segment (which, by the way, is told in the form of manuscript pieces intertwined throughout the novel).

It turns out though, that these 5 people have more history with the Jellicoe Road than we could have imagined.

Their story is one that is filled with laughter and happiness, devastating tragedy and bittersweet nostalgia.  Narnie and her troop are all made so real to us, and even though a few of them are no longer around, you can’t help but feel as if their presence is deeply soaked into the story.

I wish I could tell you how the story comes together, but that is an epiphany – an “oh, that’s why” moment that every person should have the privilege of experiencing on their own.

On the Jellicoe is also a novel that deals with so many difficult topics.

Tackling issues of abandonment, suicide and bereavement, it’s a no-holds barred look at how the devastating actions and bad decisions of the past, impact Taylor and the various characters in this novel, in the most haunting manner possible.

The secondary characters are incredible in their own way, and only enhance the sheer beauty of this novel.

From the budding friendship and romance between rival gangs and watching how beautifully it comes together, we get to see how each character, despite appearances have an underlying yearning for something so much more than the circumstances they find themselves in.

The relationship between Taylor and Jonah is definitely one of my favourites in YA. Watching how mistrust slowly fades away and brings them to a point where they become each other’s support, is nothing short of spellbinding.

What’s even better is that these two have a chemistry that’s not just based on physical attraction, but also on a heartfelt emotional connection.

At the end of the day though, On the Jellicoe Road is not just a story about love, friendship and learning to discover who and what you are, it’s also a story of how the actions of one generation can have far-reaching consequences on the ones they’ve left behind.

It’s a moving and beautiful read filled with love, loss, laughter, heartache and the power of friendship and forgiveness.  Above all, it’s a book that will make your soul weep with ALL the feelings your heart can stand.

Kyra said…
Stunning review! I'm definitely going to try and take this book out at the library on Thursday!
October 16, 2012 at 9:43 AM