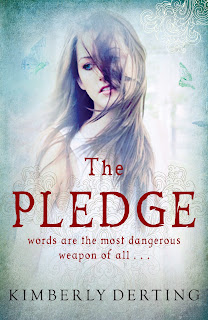 Disclaimer: This review appears on Women24.com, a South African women's lifestyle website where I manage, amongst other things, an online books section.

The Pledge
What would you do if you were governed by a queen who decreed that you had to live under a law where classes are divided by the language they speak?

The Pledge by Kimberly Derting (Allison & Busby)
Having read the first two books in Kimberly Derting's The Body Finder series (which I absolutely LOVED by the way), I couldn't help but be intrigued with her new offering.

Considering that this book is more of a dystopian fantasy than a contemporary paranormal mystery, I really wanted to see how she'd make the shift to a different sub-genre.

Surprisingly enough, I did end up enjoying it more than I initially thought I would – especially considering the fact that I, after a good few chapters in, decided to put this book on hold.

I think at this point, I read so many works of post-apocalyptic fiction, I became genre-fatigued

It just goes to show that sometimes putting a book down and waiting until you’re in the mood to read the genre again does tend to pay off.

And while I don’t think that The Pledge is as good as her Body Finder series,  the book still proved to be readable and entertaining enough for me. Enough so that it actually has me curious to see what direction the next book will be going in.

The first in a trilogy, The Pledge is set in a futuristic time period and revolves around a country that is governed by a cruel and sadistic queen. In Ludania, the queen’s word is law and the law, as such, is one which states clearly that castes are to be divided by the language you speak.

Of course, there is a common language that is spoken when it comes to bartering and trade, but if you’re caught speaking or understanding a language you’re not supposed to, public execution becomes the name of the game.

Which is why 17-year old Charlaina has to guard and keep her special ability a secret. Not only can she understand all the languages spoken (including the language of the Royals), but she also has a younger sister with an equally dangerous ability.

Unknown to her, is the fact she also comes from a long lost line of Royalty – and if she’s discovered – then she stands to lose so much more than her freedom. Luckily for her, there’s the alluring and dangerous Max, a soldier who makes a pledge to protect her.

As rebel forces gather and rise up in opposition against the queen’s rule, Charlaina needs to decide which of the people closest to her, are those she can trust.

With a generous dollop of action, magic and romance, The Pledge proves to be an interesting start to a new trilogy.

While some of the ideas in the book are a little far-fetched, the element of cruel magic at play adds an unexpectedly intriguing aspect to this novel that definitely had me looking past the book’s flaws.

In the past, the books that I’ve read within this genre, tended to lean more towards heavily relying on the sci-fi aspects within the book world, but The Pledge, even though set far into the future, almost  reads like a historical fantasy novel.

I’m not entirely sure if this is a good or bad thing, but for me, it didn’t detract too much from the overall arc of the story.

The idea of castes being divided according to the languages they speak, may not seem like a new or a realistic one, but for the most part, Kimberly manages to make it work.

There’s no denying that she’s a talented writer and with this book, manages not just to keep my interest, but she’s also created an interesting cast of characters who each have secrets of their own that somehow ties itself into how it all affects Charlie.

I loved reading about her relationships with the various people in her life, in particular that of her bond with her younger sister and parents.

Most YA fiction these days seem to neglect to include some sort of character-parental bond in their books, so it’s always nice to come across a protagonist who has a really great relationship with her parents.

Charlie herself is a sweetheart of a character. Unfailingly loyal, generous and selfless, this brave heroine puts her loved ones’ needs before her own. Even in the midst of her city being bombed, she doesn’t shirk away from her protective instincts and always looks out for her friends.

Her bleeding heart also leads her to save the life of a girl that’s been nothing but mean to her.

Another  person of interest is Brooklyn, Charlie’s best friend.

I admit to instinctively distrusting and taking her dislike to her, but she actually proved to be a lot more than I thought she would be. At the moment I’m still trying to decide just how loyal of a friend she is to Charlie, but I suppose that this will only be answered in the next two books.

Her growing relationship with Max was another thing I enjoyed watching unfolding. At first stubbornly refusing to admit to liking him, Max manages to not only wear her defense down, but to show that he does have her best interests at heart.

The secret he harbours  is one that complicates things in a predictable manner, and it’s one that adds somewhat of a forbidden relationship element to the book.

The romantic moments between them practically shimmered with energy – and as the reader, you can’t help but squeal in glee when  tender moments and hot kisses are shared.

With an intriguing cast of characters, old and timeless magic, a ruthless queen who would stop at nothing to get what she wants, and the future of a country resting in the hands of one girl, The Pledge proves to be a book that is so much more interesting than it actually sounds.
Email Post
Labels: book review dystopian fiction kimberly derting the pledge young adult fiction
Reactions:

Ivo Serenthà said…
My compliments for your blog and pictures included,I invite you in my photoblog "photosphera"