Author guest post: Jenny Miller on pushing the boundaries in YA fiction

So on my blog today, I have a guest post from Jenny Miller, author of Asylum –a YA historical paranormal thriller that is the first book in a trilogy.

When Jenny first contacted me, one of the first things that struck me about Asylum is that it deals with murder, insanity, and the different types of therapy and electrical shock treatments found in the Sanatorium that June, the protagonist of the story, finds herself in.

Being a huge fan of some of the darker YA fiction novels out there, especially the ones that tend to fearlessly explore the more controversial subjects, I couldn’t resist asking Jenny to share her thoughts about tackling tough subjects in YA.

Let’s face it – people are always finding reasons to criticise this genre, and the argument that many should be banned or censored, is one that I think won’t go away any time soon.

While I certainly think that parents should play a role in some of the more mature YA fiction out there, I definitely don’t think it should impact other readers’ individual choice and right to read the fiction that they want to read.

With this mind, Jenny gives us her take on tackling tough and taboo subjects in YA fiction.

Before I hand over to her, here’s some information about her book, which is available right now. 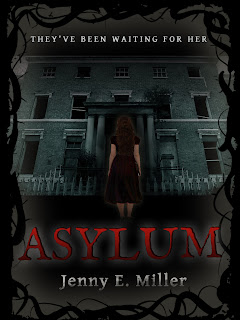 About Asylum:
June Foster’s summer is limping along.

Her life on a 1950′s farm in eastern Washington is boring–full of milking cows, picking apricots and tending to the chicken coops.

Her only friends are her record player and her books. When gorgeous, turquoise-eyed Frank falls into her world, her life becomes anything but ordinary. June falls for Frank hard and fast–he’s beautiful, impossibly strong, and capable of things ordinary humans are not.

But she’s wary about his father Jonas, a creepy man with an agenda. She should be.

Suddenly June is deathly ill, falling in and out of consciousness. When she recovers, June and Frank discover Jonas’s deadly plans for her–and June takes revenge.

Convicted of murder, declared insane and sentenced to life at Washington Pines Sanitarium, June is stuck. Jonas’s plans are reaching her beyond the grave, and she suspects that there’s a lot more going on in the sanitarium than group therapy and electric shocks.

Something evil has followed her here, or maybe it was waiting for her all along. If Frank doesn’t break her out soon, she’ll lose her mind–and her life.

YA Novels: What’s not to write?

While writing my young adult novel ASYLUM, I was constantly asking myself what I could and could not write about.

Without giving too much away, the book deals with murder (though not gruesomely), teen pregnancy, blossoming relationships and unstable families.

Was I pushing the envelope with a sixteen year-old pregnant character? Could I say the f-word? Could a young girl commit murder?

The long and the short of it is, yes, I could.

It was and is my book, and I can write about whatever I want. But the subjects I’ve chosen aren’t usually discussed in young adult writing, unless they’re taking place in an alternate universe (and therefore not exactly taboo).

Take the TWILIGHT saga, for example. Sex? Yep. Pregnancy? Yep. Teen marriage? Uh huh. But it’s all with a vampire, and not realistic to our world, so it doesn’t exactly push the envelope. The HUNGER GAMES series contains murder by the main character, but it’s in self-defense, and part of a game in a dystopian world.

My book delves into the paranormal, but it’s a touch more realistic than TWILIGHT and the HUNGER GAMES.

But still, the question is, what subjects do authors use and which do they shy away from in teen books?

I think (and I’m generalizing here—I’m sure there are exceptions) that young adult novels that are set in this world, in present time, tend to shy away from sex, violence, drugs, and language.

But once they move to an alternate world, everything is fair game. A dystopian or fantasy world lets you break all the rules and create your own.

So what topics should young adult writers cover and which should they steer away from? In all honesty, my answers are everything, and nothing.

I believe that kids today are much smarter and more self-aware than we give them credit for. Bella Swan didn’t spawn a thousand teen marriages, and Katniss Everdeen didn’t cause a band of young girls to pick up bows and arrows and start shooting.

I truly think that we can write about whatever we want (as long as it’s intriguing, smart and well-told) and there are very few subjects that should be taboo.  It’s all about how you handle it. As long as you’re not blatantly encouraging murder, teen pregnancy, drug abuse, etc., go for it.

Chances are kids have been exposed to these subjects long before they read it in your book.
That being said, parents should always, always pre-screen the books their kids are reading to make sure the content is appropriate for their age and personality. Just because they can read beyond their grade level does not mean they should.

Books at higher reading levels are more mature in grammar and in content. And unless you’re prepared to answer questions and discuss the subject matter with them, don’t let them read the book.

Thanks for stopping by Jenny.

She studied creative writing at the University of Washington and holds a Masters in Teaching from Seattle University.

She still lives in the Emerald City with her husband, two kids, and a dog who thinks he’s a cat. ASYLUM is her first novel.

Jo said…
Great article, thank you for this. Which boundaries I can push (and how far) is something I'm grappling with in planning my new YA novel.

One of the solid no-no's I've been warned of is that the hero-heroine can't be out of school (older than school age) in YA books.

This is very weird to me, because most girls are attracted to and date guys a few years older than themselves. I want my hero to be 20 and my heroine to be 18 - is 18 months such a taboo??

I've never heard that rule, and I don't necessarily think it needs to be followed. In TWILIGHT, for example, Bella graduates and turns 19. In SLAMMED, the romantic interest is in his 20's while the girl is in high school. I think having the entire cast in their 20's might not be a great idea for a YA novel since it could make them less relatable for a younger audience, but a few here or there is totally fine.