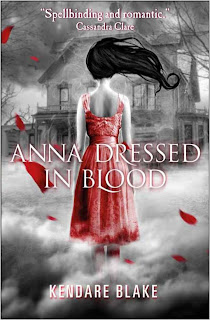 Anna Dressed in Blood
A ghost hunter meets his match and falls in love when he comes face to face with a blood-soaked and vengeful ghost with a tragic past.

Disclaimer: A shortened version of this book review also appears on Women24.com, a South African women's lifestyle website where I manage, amongst other things, an online books section.

It's been years since I've read a good gothic horror romance, so I was pretty excited when Anna Dressed in Blood arrived on my desk.

Having had this book highly recommended to me by bookish friends who've done nothing but praise this book, I just had to give it a go.

And boy, what an absolute treat this book ended up being.

Anna Dressed in Blood proves itself to be a ghost story filled with the kind of spellbinding power that will not only have you enraptured and biting your nails as the tension in this novel builds, but will also ensure that you’ll end up sleeping with the lights on.

For me, any ghost story that manages to legitimately creep you out in that way is a definite winner.

Not only is Anna Dressed in Blood is a spine-chilling, beautiful and sinister read, but it's also dark, bloody, and contradictorily enough, hauntingly romantic.

In short, it's very much like a nocturne in written form and - right from the start -I was drawn in by its liltingly eerie melodiousness and the biting, no-holds barred approach to its gloriously dark and bloody scenes.

This is a novel that will cause your insides to twist and turn as you desperately wait in anticipation to see who will die next, or who will manage to escape by a hair's breadth.

Not quite sure whether to believe me or not? Let me give you an idea of what you can expect.

Her name is Anna.

She lives in a house in Thunder Bay, where the residents, who mostly think she's nothing but an urban legend, have named her Anna Dressed in Blood.

With her writhing hair, blood-soaked dress, coal-black eyes and prominent veins snaking across her skin, she's a terrifying and vindictive visage who tears into the flesh of any soul who dares to walk into her home.

No one who dares to enter walks out alive - at least not until Cas Lowood shows up on the scene.

Cas Lowood is not your average guy.

He lives in a world of darkness, spending most of his nights hunting the dead. Following in his father’s footsteps, Cas lives and breathes for the killing; highly skilled and fearless in the face of death.

In all his years of stalking ghosts, and with the exception of his father’s killer, he’s never failed to take out any phantom haunting the streets.

Then Anna shows up.

When a prank that goes horribly wrong ends up with Cas finding himself in Anna’s house, the ghost he stumbles upon is like an unholy vision of terror come to life.

No longer a girl who was wearing a pretty white dress when she was murdered back in 1958, the apparition he encounters is a whirlwind of rage and bloodcurdling ghastliness.

With her demon-black eyes and blood-soaked countenance, Anna proves to be impervious to both Cas and his magic-fuelled athame.

Expecting a painful death at her hands, he's beyond surprised when Anna, for whatever reason, decides to spare him.

Of course, when he decides, with the help of his new-found friends (one of whom has his own set of witchy skills) to go back to try to finish her off, Cas discovers that there’s so much more to the wrathful ghost than he expected.

And soon, he finds himself more than a little intrigued with the ghost-girl whose devastatingly tragic tale slowly emerges and throws him for a loop - and for the first time - Cas finds himself not wanting kill a ghost, but rather to save one.

Anna Dressed in Blood is truly one of the most magnificent books I’ve read this year, so far.  Not just because the plotline is so unique, but because the gorgeous prose ensures that you get sucked into the novel,  regardless of whether or not you’re a fan of horror or ghost stories.

There’s at once a mellifluous, unflinching and gloomy quality to her prose that not only persuades you to keep reading, but makes you long to join in on the ghost-hunting escapades in spite of yourself.

There’s also an almost-but-not-quite Shakespearean quality to the novel that will not only have you rooting for Cas and Anna’s budding and fantastically understated romance, but will also make your heart bleed for Anna, whose story proves to be  a wretched tale filled with heartbreak and woe.

But, it's not just the romance that will capture you. In fact, I consider that to be a wonderful by-product of a novel that is jam-packed with magic, mayhem and spine-tingling suspense.

Cas is a fantastic character and has such a likeable voice.

I have to confess I don't often read books that are written from a strictly male point of view, so he proved to be quite a pleasant and welcome surprise (he also made me realise that I need to read male POV books on a more regular basis).

He's ballsy without being an egotistic badass, independent without treating his fellow peers any differently and although he's a total kickass at what he does, Kendare portrays him in a way that shows that he's not infallible.

The supporting cast of characters give this novel an extra kick and will make you feel as if they aren't being pushed aside and being placed in the novel for the sake of convenience.

You'll especially appreciate the fact that the popular girl in this story is actually a NICE girl, as opposed to the usual stereotypical casting type one often sees in chick lit.

Of course, for me, Anna's story proved to be a deeply unsettling and heart-breaking tale.

What makes this novel standout for me is that she not only manages to create a believably haunted  and haunting character in Anna, but she also gets the reader to not only empathise with Anna (despite what she's done), but to actually like her too.

The unexpected twists and turns this novel takes only adds to the chilling atmosphere and will have you clenching your fists in dread to see how it all ends.

I don't want to give anything away, but I can say that with an ending like that, I'm counting down the days until the sequel comes out (it’s out in the US already).

Filled with relatively graphic descriptions of gore, I'd probably not pass this on to a very young reader. The book also deals with a fair amount of occult themes, so if you're not comfortable with that sort of thing, you may want to give it a miss.

Personally, I loved it and would definitely recommend it for those looking for a book tinged with both elements of horror and romance.  It's definitely going to be in my top 10 the end of this year.
Email Post
Labels: anna dressed in blood book review horror kendare blake young adult fiction
Reactions: Location: Cape Town, South Africa

Unknown said…
Wonderful review Tammy! You captured everything I feel for Anna Dressed In Blood perfectly. You going to read Girl of Nightmares soon?
April 19, 2013 at 11:07 PM