Skip to main content
Labels
Posted by Tammy (The Book Fairy's Haven) May 22, 2013

Book review: From What I Remember 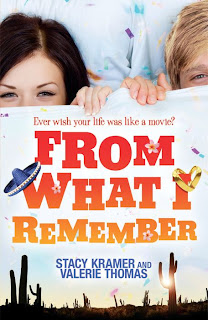 From What I Remember
Sometimes the best things happen when everything goes to hell and you're left stranded in a place with the last person you want to be with.

Disclaimer: This review also appears on Women24.com, a South African women's lifestyle website where I manage, amongst other things, an online books section.

One would think that, based on From What I Remember's cover, that the book is all cotton candy and fluffy goodness.

Well, you'd be right in a sense.

But you'd be wrong in assuming that it's just that and nothing more.  Because the truth is, that From What I Remember is one of those books that end up really surprising you with its layers.  And I mean that in the best way possible.

It's like biting into an already iced cupcake and discovering a hidden, gooey centre that will have you chewing the cupcake for much longer than you originally thought you would.

Between all the fun shenanigans and road-tripping mayhem and madness, I found myself not only giggling my way through From What I Remember, but genuinely feeling a kinship with the characters too.

Not only that, but I was also left feeling rather nostalgic, because reading about the characters experiences, had me wishing I could redo my last few years and high school - except I wouldn't be the chronically awkward wallflower who spent more time hiding from her peers instead of going out and grabbing life by its lapels.

And this, in essence, is to me what the book is about.

Written by Stacy Kramer (who by the way, just so happens to be a screenplay writer) and Valerie Kramer, From What I Remember is a delightful, laugh-out-loud read that introduces us to a cast of colourful characters; characters we've all come across at least once in our lifetime.

The four main characters in the story are as follows:

Being a scholarship student, life isn't exactly easy for her, and because she's surrounded by rich and entitled teens, she has to work extra hard for any form of recognition.

Not that that helps her in the long run.

With only a wealthy and gay cross-dressing film nerd for a friend (who is just as much an outcast as she is), Kylie is the awkward turtle of awkward turtles when it comes to any form of social interaction; not to mention having the dubious honour of being the school's social pariah.

Between being left with the responsibility of looking after her brother (who has Asperger's syndrome), and pursuing her dream to become a screenplay writer with only Will for company, Kylie's life is filled with a routine that's monotonous, but safe.

Will, on the other hand, is loud, flamboyant and flaunts his homosexuality in the only way that he knows how: by dressing up in the most fabulous and outrageous clothes he can find.

While he desperately tries to get Kylie to believe in herself, Will is forced to deal with his own issues on identity and fitting in. And while the two of them are fiercely protective of one another, it becomes clear that the world is not a bubble, and sometimes the best way to experience life, is to go wherever life decides to take you.

On the flipside of the coin, and at the top of the social food chain, are golden boy Max and his girlfriend, mean girl Lily.

Max has it all - the classic good looks, the popularity, the wealth and all the best opportunity that life could offer him.  With queen bee Lily at his side, it looks like he's pretty much set for everything fabulous and so much more.

And yet they too, have their own share of issues to deal with - issues that make them as relatable as Will and Kylie are to the reader.

Now you might be asking the following: just how do these teens' lives cross and collide with one another?

The trouble all starts with one final assignment before graduation.

When Kylie and Max are paired up to work on said task, neither of them anticipate that it would lead to Kylie chasing after a punk who steals her laptop and Max following after. Nor do they expect to end up in Mexico without passports.

As a result, they do what any teens stranded in a place, with no means of getting back before graduation day, does: they make the most of their time getting to know the locals and party up a storm.

And of course, on the other side of the world, Will and Lily are both left wondering where on earth they are.

Now with a concept like that, how could this book be anything but fun?

For me, From What I Remember was such an incredible joy to read ; a joy I certainly didn't expect to feel when I first picked up this book.

I went into this book thinking that it would be nothing but a sugary antidote to all the angst-ridden novels I've been reading lately, only to come out applauding Stacy Kramer and Valerie Thomas for not only creating characters that are funny, flawed, entertaining and surprisingly well-rounded, but for the heart-warming message about what it really means to have the courage to follow your dreams.

Kylie is the kind of character that you can instantly relate to. She's got so much going for her, but is so insecure about herself, that she doesn't realise how awesome she really is.

Even though my school days are behind me, there are still days that I feel exactly the way she does, which is a big part of the reason I couldn't help but encourage and root for her all the way.

For someone who is so likeable and self-sacrificing, you just can't help but want the best for her.  Her fiercely protective and loving behaviour towards her younger brother, Jake (who has Asperger's) is incredibly moving too.

What I also loved about the novel was all the colourful descriptions of life in Mexico. Think Sangrias at Sunset, hot and spicy Mexican food and drunkenly fabulous fiestas where people revel in life and go from one house to the next to partake in festivities.

One thing is clear from this novel - the Mexicans definitely don't need an excuse to party.

It's this backdrop that makes for the perfect unfolding of the spicy-sweet and budding romance between Kylie and Max. Yes, Max-with-the-mean-girl-Lily-for-a-girlfriend Max. Perhaps this concept is clichéd, but  there's no denying how much fun it is to read about these kind of situations.

Plus, the chemistry between Max and Kylie is just too hard to ignore.  As for how Lily and Will fit in (you're going to love the outrageously fabulous Will) with the story - well, you're going to have to read the book to find out more.

The one thing I can tell you is that after reading From What I Remember,  you're going to be wishing for your own, fall-in-love-in-a-foreign-country story.

Be prepared - this book will take you on the trip of a lifetime.
Email Post
Labels: book review from what I remember stacy kramer valerie thomas ya contemporary fiction young adult fiction
Reactions: Location: Cape Town, South Africa