Cover reveal: When the World Was Flat (and We Were in Love) by Ingrid Jonach

Ok, ok – so I’m always  excited about cover reveals, but this one in particular, because, not only will I be part of the blog tour (coming up in September) for this, but because I’m a huge sucker for books with beautiful titles.

I mean, how gorgeous is When the World Was Flat (and We Were in Love), the title of Ingrid Jonach’s YA sci-fi romance novel? I swear, there are some books you just know you’re going to read based on the title alone.

For me, Ingrid’s book is that book. I will, however, go on to add that once I read the synopsis, I was completely and irrevocably sold on the premise of the novel too. I can’t wait to read this book.

As for the cover itself, I think it’s beautiful in its simplicity. I adore the heart-shaped key and the red ribbon which it’s attached to and can’t wait to see how it ties in with the novel.

Have a look below. Book summary and more info about Ingrid follows beneath the cover reveal. 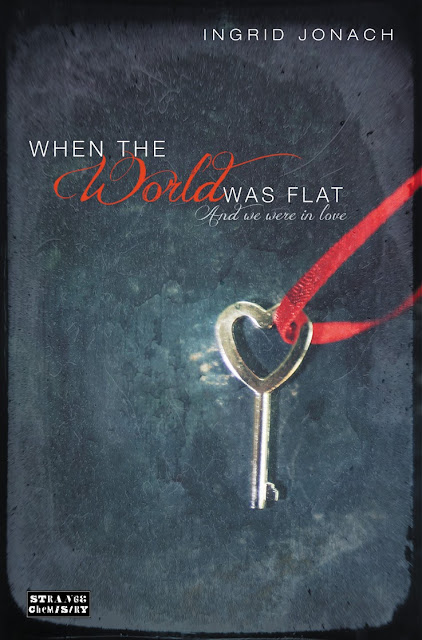 About the book:
Looking back, I wonder if I had an inkling that my life was about to go from ordinary to extraordinary.

When sixteen-year-old Lillie Hart meets the gorgeous and mysterious Tom Windsor-Smith for the first time, it’s like fireworks — for her, anyway. Tom looks as if he would be more interested in watching paint dry; as if he is bored by her and by her small Nebraskan town in general.

But as Lillie begins to break down the walls of his seemingly impenetrable exterior, she starts to suspect that he holds the answers to her reoccurring nightmares and to the impossible memories which keep bubbling to the surface of her mind — memories of the two of them, together and in love.

When she at last learns the truth about their connection, Lillie discovers that Tom has been hiding an earth-shattering secret; a secret that is bigger — and much more terrifying and beautiful — than the both of them. She also discovers that once you finally understand that the world is round, there is no way to make it flat again.

An epic and deeply original sci-fi romance, taking inspiration from Albert Einstein’s theories and the world-bending wonder of true love itself

Add When the World Was Flat (and We Were in Love) to your TBR pile.

About Ingrid
Ingrid Jonach writes books for children and young adults, including the chapter books The Frank Frankie and Frankie goes to France published by Pan Macmillan, and When the World was Flat (and we were in love) published by Strange Chemistry.

Since graduating from university with a Bachelor of Arts in Professional Writing (Hons) in 2005, Ingrid has worked as a journalist and in public relations, as well as for the Australian Government.

Ingrid loves to promote reading and writing, and has been a guest speaker at a number of schools and literary festivals across Australia, where she lives with her husband Craig and their pug dog Mooshi.

Despite her best efforts, neither Craig nor Mooshi read fiction.

Where you can find Ingrid: