Book talk: The Anti-hero who should have lived

Another coloumn I’ve written a while ago which I’ve decided to post here too. Incidentally, since the time I wrote this (which was last month), I’ve still been doing a lot of Harry Potter fan fic reads. Which reminds me, I definitely need to write a piece on my obsession with fan fiction and non-canon pairings.

For now though, I wax lyrical about one of my beloved Harry Potter characters.

For the last couple of weeks, I’ve been taking a break from my regular reading and have been revisiting the worlds and characters from some of my favourite books, as told from the perspective of fans.

I’ve been devouring an obscene amount of fan fiction; paying a particular amount of attention to Harry Potter (I'll tell you a little more about my obsession with fan fic in an up and coming column).

Now, it's at this point that you might be wondering: just why on earth would I need to go online to revisit a book universe, when I can just go back to the original novels in order to experience it all over again?

Before I continue, if you haven’t read the Harry Potter books (Why on earth not, by the way?) or watched the movies yet, you may want to stop reading this part of the column and visit our reviews section instead.

You see, as it turns out, apparently I still haven't forgiven J.K. Rowling for killing Severus Snape.

Yes, I do realise that it’s been years since I’ve last read Harry Potter, but, having read a good majority of fan fiction in which readers choose to keep Snape alive, has suddenly, and once again, brought home this fact to me.

I understand why he had to die, and yes I think that in putting myself in the shoes of the writer, there’ll always be those characters that (probably) have to be killed for a good cause, but it does not mean that I have to like it (insert sulky pout here).

Ever since I decided to revisit the world of Harry Potter I’ve been feeling decidedly weepy over the Greasy git who made almost everyone’s life at Hogwarts – targeting The Golden Trio in particular – a living hell.

In spite of his nasty demeanour, I've always thought that Snape is one of the most deeply layered, complex and enigmatic characters I’ve encountered in a novel.

Tragic, flawed, mercurial and downright mean to say the least; he is by no means at the top of the list for reader’s best friend of the year award.

And yet, everything about his vicious and spiteful persona, made him perfect for his dual role of being spy and traitor.

When I first learnt about all the mistakes he's made and what his very reason was for protecting a boy whom he could barely stand, to say my heart bled would be putting it mildly. 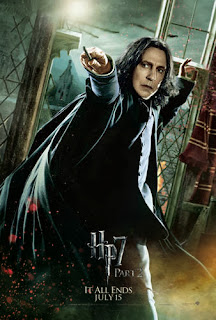 Even today I get all choked up when I think of all the sacrifices he's made and the high price he had to pay as a result of his actions.

Such fierce loyalty and devotion shouldn’t have had to be curtailed by death.

If there ever was a queen of mastering the portrayal of the ultimate anti-hero, it would be J.K. Rowling.
In my mind, she’s not only managed to create a character that, for the most part, engendered feelings of antipathy in both the reader and the characters he interacted with, but in the process has also humanised him.

I may probably get into trouble with you lovely lot for even daring to say this, but to me he became the hero of the story; well, the anti-hero who should have lived to have been rewarded, really.

I realise that life, both inside and outside of fictional words, does not always play itself out the way that we want it to.

Paradoxically enough, this is the essence that makes life worth all of its challenges and books worth reading. But still, to quote the rather trite saying, "the heart wants what it wants", doesn't it?

At the end of the day, my bleeding heart still feels that it was unfair that he spent the majority of his life making up for the mistakes of the past, and didn’t live to see his redemption in the eyes of his fellow peers.

And this, my fellow book addicts, is why I go back to relive the books online.

Because, JK may have closed the chapter on Harry Potter, but through the eyes of the fans recreating the world and adding their own unique spin on the series, the books and characters come to life over and over again.

And it’s here where I can pretend that Snape still lives on – in both the books and in my memory.

It's as simple as that.

Which character’s story has stayed with you the longest? I'd love to hear about your most memorable book hero/villian/underdog.