I’m ridiculously excited to welcome best-selling author, Lauren Kate to my blog today.  As the author of the Fallen series (Fallen, Torment, Passion and Rapture), she certainly needs no introduction.

On my blog today, she chats about her latest novel, Teardrop (you can read my review here) and tells us about the challenges she faced while writing this novel, discusses the mythological elements of Teardrop, shares what she thinks of love triangles in YA fiction and gives us a tiny peek into what we can expect in the next instalment of the trilogy.

Please note that if you haven’t read the book yet, this interview does contain spoilers.

Welcome to my blog Lauren and thank you so much for taking the time out to answer my questions. 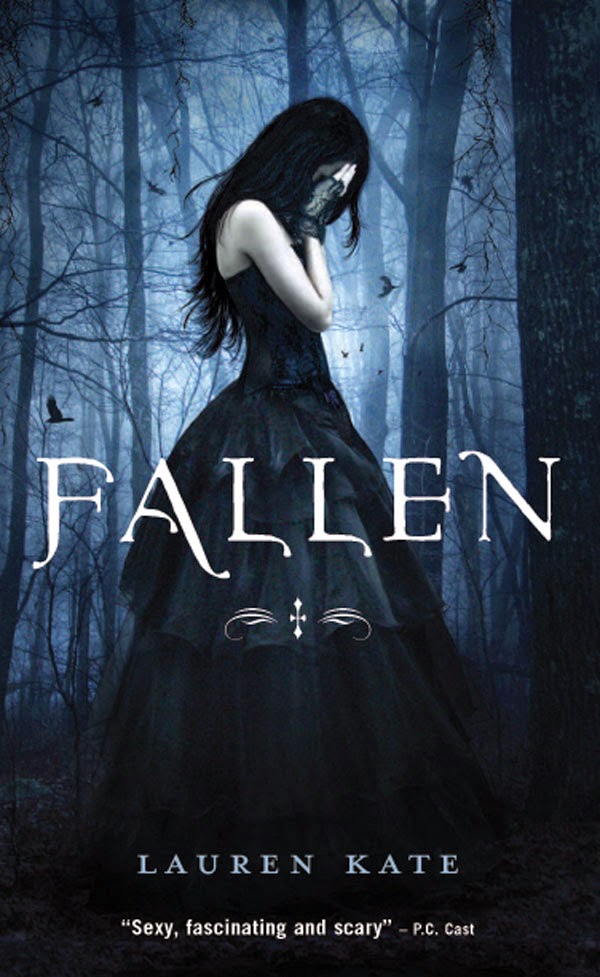 1. You’ve gone from writing about fallen angels to writing a book that’s more mythological than just merely a paranormal read.

Both began with me diving into a stack of every book I could find on the topic and a trip someplace where people think about that topic differently than I do.

For the Fallen series, I travelled to Jerusalem. For Teardrop, I visited Turkey.

The original texts on both topics are ancient and replete with fascinating discrepancies, so I got to piece together my favorite elements from many old sources on both mythologies and created my own angelology, my own Atlanteology.

Eureka’s story first came to me while I was writing Torment, so I’ve been waiting to explore her tale for several years. I knew when I finished Rapture that I had finished Luce and Daniel’s story as well as I ever would.

I released them and their love into the universe. I was ready to move on to Teardrop. 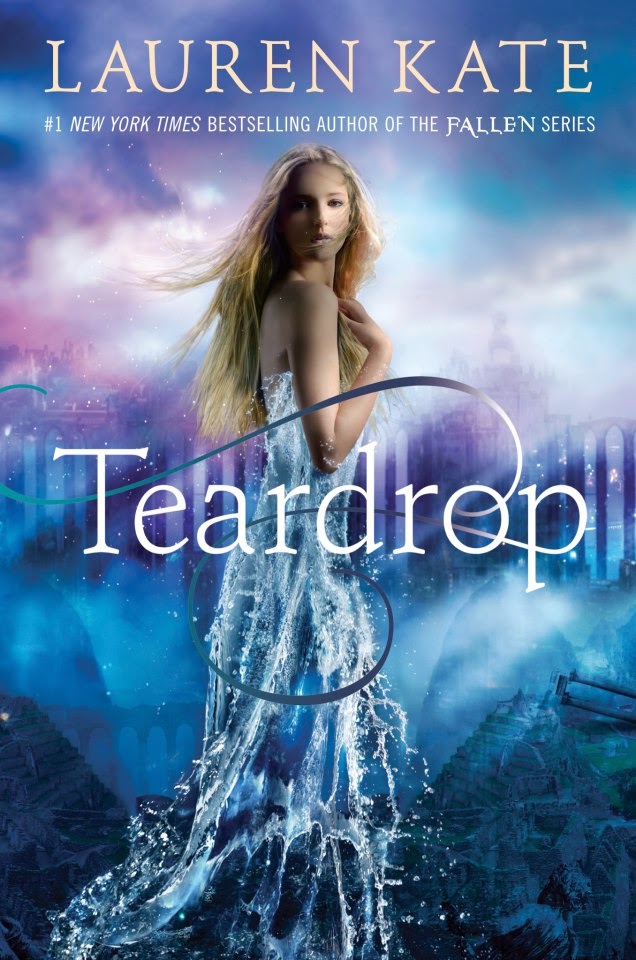 2. Between the Fallen series and Teardrop, how different were the challenges that you had to face during the writing process?

First drafts are always torturous for me. With every book, I think of giving up.

My family has to remind me that I always get like that when I’m mired in the middle of a draft. Revisions are the opposite.

I float through them joyously.

They’re difficult and intensive, but I enjoy the editing process far more than the drafting. I’m nearing the end of my last revision to Teardrop’s sequel, and laughing at myself that I ever disliked this book. It is by far my favorite now.

3. I’m always fascinated by the how and why behind a book character’s name. Can you tell us a little about how the birth of Eureka and Ander’s names come about and why you specifically chose those names?

In Greek, Eureka translates to “I found it,” which Archimedes cried when he discovered the mechanics of water displacement. Eureka is a girl who cries one world into the ocean and raises another from it’s depths, so water displacement is at the core of her being.

It’s also interesting to call a character who feels so lost “I found it.”

Ander is named for Leander of the romantic myth, Hero and Leander. Their homes were separated by the Dardanelles, but each night, Leander would swim across the straight to be with her.

4. I'm incredibly intrigued by the fact that you chose Louisiana as the settings for your book.

Was the idea for the settings already there when you first came up with the idea of the story? And what made you choose Louisiana specifically, as opposed to say, somewhere in Greece?

Setting is a character—it needs a dynamism in order to earn its place in the book. Originally, I thought Eureka was going to be a Southern California girl. I actually wrote a few chapters with her set in LA.

She didn’t become herself though until I found her in Louisiana. An accidental trip brought me to New Iberia, and even though I was frustrated at the time about being torn away from working on my manuscript back home, taking that trip was the best thing that ever happened to Teardrop.

5. I absolutely loved how you interwove the mythology from The Book of Love, between Eureka’s present day life. Was the juxtaposition between past and present something that was deliberate on your part?

The Atlantean world parallels Eureka’s contemporary world, and each of the characters in the series will have his or her own mirroring counterpart in the other world.

At first glance, they have little in common—even the language I use to tell the Atlantean sections of the story is different from the language of Eureka’s world.

In Teardrop, the two worlds are discrete, with no means of accessing one another (except for the Book of Love’s passages). But later in the sequel, the worlds collide, and it’s thrilling.

6. Selene and Leander’s story is one that certainly captured my interest, not least of all because of the way their relationship unfolded, but also because of the outsider elements  - the gossipwitches and Delphine.

Where did the idea for their story come from? When you came up with Eureka’s story – did that just slide automatically in place, or did that follow afterwards?

The gossipwitches were an impromptu inclusion in the Book of Love. I didn’t know how important they were when I invented them casually. The same goes for Delphine, who becomes a very prominent figure in the second book.

7. Will we learn a little more about the dynamic between Delphine and Selene in the forthcoming books?

I think you will be shocked. I know I was.

8. Rhoda’s death was a particularly traumatic one – not only did she die trying to save the lives of her children, but she also died in front of almost everyone.

Why did you choose to let her die in this manner and how hard was it for you to write this particular scene?

What’s interesting about the women in Teardrop is that they perish taking what I think are big, admirable risks: Rhoda dies defending her children. Blavatsky dies standing by her promise to Eureka. Diana lived her life as a risk-taker.

The difference, I suppose, is that the adults in the story are not invincible in the same way the teen characters are allowed to be. Eureka, Cat, Brooks, and Ander take as many risks as the adults, and somehow they manage to scrape by.

This invincibility is born out of fearlessness, something I think adults lose more and more of every day. I imagine there’s something subconscious going on regarding the ill-fated ladies in Teardrop. I might be grappling with my own mortality.

9.  What's your take on love triangles in YA fiction? People either love it or hate it, and yet, they often make for such a compelling element in stories.

When do you think there is there a need for them and when should a story skip out on it entirely?

Love triangle are my very favorite things to write. I find love and all its complications endlessly empowering.

To be confronted with two opposite choice, to have to determine what you’re life might look like if you took one path versus the other…this is where character is built. It’s hard for me to imagine writing a story that doesn’t center around a love triangle.

10. Finally, can you give us a little info about the direction in which the next book will be headed?

The wildest thing about the sequel to Teardrop is that my hero has become my villain. For the first time in my writing life, I’ve stopped asking myself, “is this character sympathetic,” and started asking myself, “has she earned this murder or that betrayal.”

About Teardrop:
Never, ever cry...

eventeen-year-old Eureka won't let anyone close enough to feel her pain. After her mother was killed in a freak accident, the things she used to love hold no meaning.

She wants to escape, but one thing holds her back: Ander, the boy who is everywhere she goes, whose turquoise eyes are like the ocean. And then Eureka uncovers an ancient tale of romance and heartbreak, about a girl who cried an entire continent into the sea.

Suddenly her mother's death and Ander's appearance seem connected, and her life takes on dark undercurrents that don't make sense. Can everything you love be washed away?

Add it to your TBR pile and check out my review here.

About Lauren
Lauren Kate grew up in Dallas, went to school in Atlanta, and started writing in New York.

She is the author of the FALLEN novels: Fallen, Torment, Passion, Rapture, and Fallen in Love, as well as The Betrayal of Natalie Hargrove. Her books have been translated into more than thirty languages.

She lives in Los Angeles with her husband, her daughter, and her dog. She is currently at work on a new series, Teardrop.