Today I’d like to welcome YA author, Jennifer Ridyard to my blog. As one half of the duo who wrote the dystopian novel Conquest, a book I enjoyed and recently reviewed, Jennifer is someone who is actually no stranger to my blog.

Last time I featured her, Jennifer wrote an awesome guest post on why science fiction isn’t just a guy thing (I’d highly recommend that you check it out).

In today’s spot, I chat to Jennifer about the concept behind Conquest, what it was like writing with John Connolly (co-author of the book, best-selling author of a popular crime thriller series and, her actual partner) and what’s in store for the next book.

For those who haven’t heard about Conquest before, you can check out my in-depth review which I posted here, and add it to your Goodreads pile.

If you have read the book, just a note of caution: there are one or two spoilery questions below (but don’t worry, I’ve highlighted it clearly so that you can just skip pass those if you’d like). 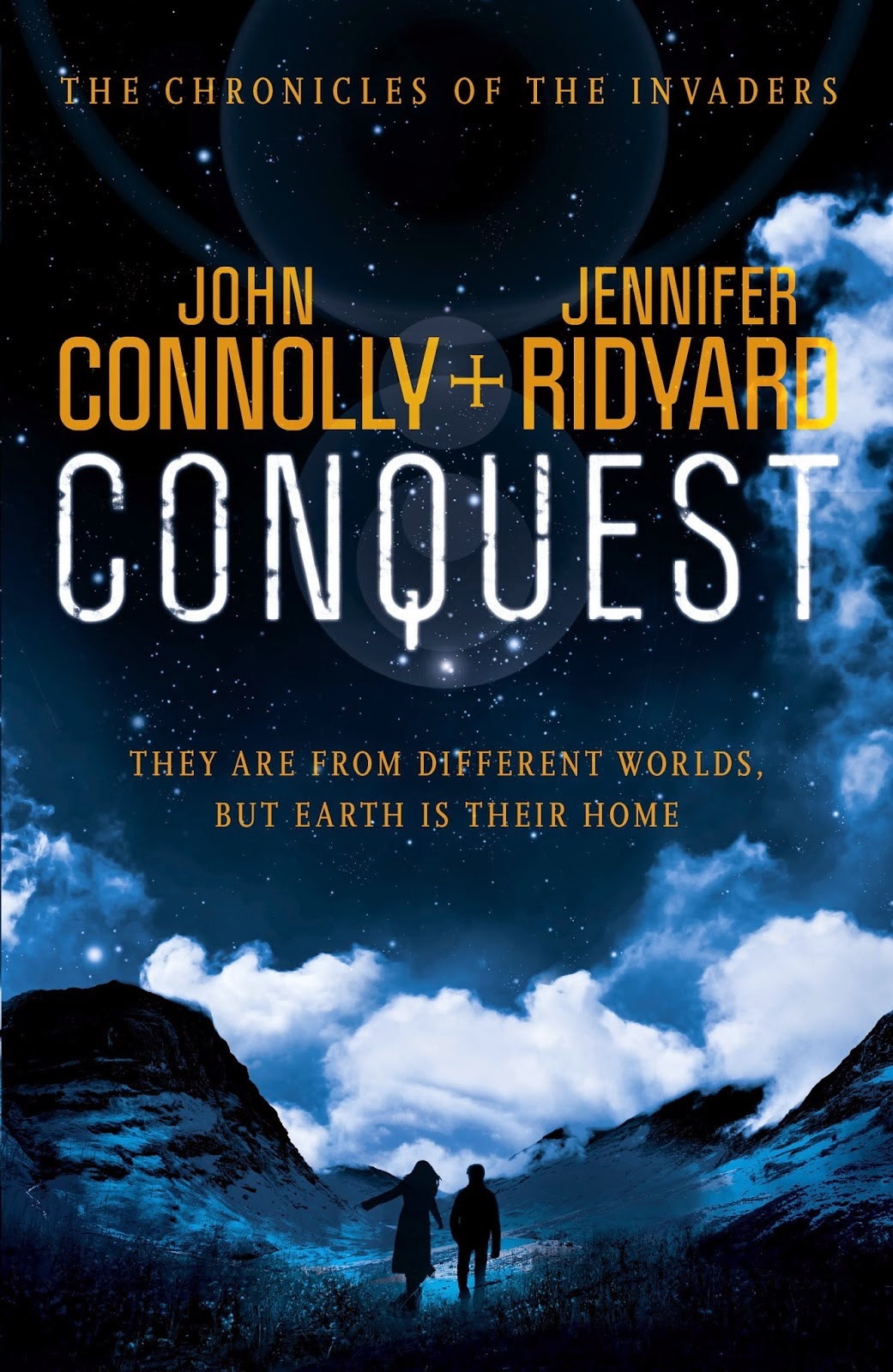 Welcome to the blog Jen!

Q1:  You’ve been a journalist for many years. When John first approached you with the idea of the book – a book about an alien girl being born on earth – what was it that made you say yes?

Oooh, it was probably my ego that made me say yes!

The story of how it happened entailed a bit of wine (him) and a bit of madness (me): he’d been on a boozy lunch-turned-dinner with a friend, and he’d been musing over the idea of a story told from the perspective of the first alien girl to be born on earth after the invasion, so when he got home at around midnight full of Dutch courage, he asked me.

He said he felt he couldn’t comfortably write a teenage girl – any teenage girl and even more so an alien teenage girl! – without some female input, and also he was very pressed for time, having other deadlines and books to write.

He was terribly nervous, and sweetly humble, and I was just so delighted to be asked, to be trusted that much by someone who is so solitary and efficient as a writer, and it felt rather like it validated my own (largely unsuccessful) attempts to write fiction.

So I foolishly leapt in where angels ran screaming, because I’m no angel! Like I said, it was probably madness, because it was damned hard!

Q2:  How challenging did you find the transition from being a solo writer to being a co-author?

I found it pretty easy… at first. I think John struggled a lot more. As a journalist, I was used to working in a messy, open-plan office, with other voices and opinions and sub-editors and editors all having their say.

I was used to being part of a process. John’s background was in journalism too, but nearly 20 books in he is well used to working alone, unchallenged, and apparently I can be very challenging. Snigger.

Q4:  What kind of structure did you and John employ when writing the book? Were you each responsible for different characters and character arcs?

Or did you write the book in such a way that you started where John left off?

He didn’t know what the book was actually going to be about because he just had the seed of an idea, but I told him I needed more than that.

I suggested he start it off, and then write a synopsis for the rest, so he went away then came back several weeks later with 14 000 words, a 2-page synopsis, and a frown on his face.

As he said, this was not how he worked usually, and he’d found it difficult.

I then sat down, read through it all and off I went, type-type-type, rather delighted with myself as it grew to 70 000 words, with my own characters being born – like Fremd and Just Joe, and the people on the Highland march – and the ones he had created developing and changing, and I really started to see Syl and Ani as mine. Mine!

Q3: At which points during the writing process did you and John oppose each other the most? And how did you find a way to compromise on aspects in the novel that you didn’t agree on?

When I agreed to write with him, I said that he would have the final say, being a successful, published novelist. That was my compromise, theoretically at least.

But sometimes I forget what an opinionated, bloody-minded person I can be.
As I said, I handed him back 70-odd thousand words, all chuffed with myself, and he said “Who on earth are you writing for?”

I was devasted: when he’d said “young adult” I’d taken that to be around 13 or 14, because it was at that age I’d taken to reading adult books, but he meant an older teenager, and what I’d done was too simplistic, too young.

He tore into my babies, beat them, reshaped them, and then handed me back his version of our completed book, now 120 000 words, and a much more serious, dark beast.

Not to be outdone, I then had a small slash-and-burn of my own, adding more lightness, humour and humanity (odd choice of words!) to it all – I hope! – and getting rid of some of the darker, denser prose at which he excels. I think. Well, that’s how I remember it.

It was tough though. It was very tough indeed. Egos were bruised. Wine was consumed. Weight was gained.

Q5: Speaking of characters, I thought Syl, Ani and Meia were phenomenal characters.

What I particularly found interesting is that Ani’s gift was an incredibly important factor in Conquest – something which is not often seen in supporting characters in most novels.

In fact, while we get subtle hints about Syl, it’s Ani that really rises to the occasion in one major rescue scene.  What made you decide to make use of Ani’s gift instead of Syl’s?

The Chronicles of the Invaders is a trilogy, and there is some way to go still. Syl particularly needs room to grow and change as the main protaganist, which I suppose she can do best against the backdrop of more static, set characters, like funny, quirky Ani.

Also, Syl’s powers are darker, so are only being revealed as the darkness of adulthood encroaches on youth and innocence.

I suppose it could be a metaphor if I tried hard enough! I guess it just worked too: both of them were conceived on the same strange night, in the same starlit phenomenon, so it’s nice to know that they were both formed by it. Sometimes you don’t plan these things.

Q6: You chose Scotland as the predominant setting of the novel.

While there are certainly Illyri that dominates over many areas, the main focus is placed on what happens in Scotland, in particular the Highlands. Is there any particular reason for this?

Scotland, meanwhile, with its history of rebellion and occupation and its huge nationalism, seemed like fertile ground for a revolutionary, underground army, which is what we needed.

It has a beautiful, harsh, desolate countryside in its Highlands, the kind of wild place you can easily get lost. It has attitude in bucketloads. It has that Celtic fire. The only other option would have been Ireland, but that’s a bit close to home…

Sometimes you need to be a step outside to see in properly. Also, it has the rather fabulous sprawl that is Edinburgh Castle: who could resist that as a base?

Q7: If you could describe a country on earth that would be closest to what Illyri’s world looks like, which country would it be and why?

Oh goodness, I couldn’t begin to tell you. The thing about Illyr is, like our own world, it has many different regions, many different climates (although generally it’s warmer and more humid, but it does have polar ice-caps), and many different geographical features.

It is not uniform throughout. There are cities that spill into the ocean, there are plants that reach to the storm clouds, there is a yellow sea, there is more than one moon, their sun moves slower so their days are longer.

The difference would be that the Earth has many governments, many countries, and no unity, whereas Illyr has one Ruling Council (however divided that might be), as is true of most science fiction. I doubt a world could invade unless it was unified.

Q8: Which character did you find the most challenging to write?

The Illyri were much simpler than the humans! We were making their nature up, so they could be like us, but different… alien.

With the humans, we all know humanity, and so we each bring our own expectations and understanding to our reading. When you’re creating what are essentially a new species, you get to play a bit more.

With the already existing problems between the Military and Diplomatic Corps, the two existing factions who have different ideologies about ruling earth, the Nairene Sisterhood only exacerbates the situation.

How did you come up with the idea of the Sisterhood and why did you decide to include them in an environment already teeming with hostility?

The Nairene Sisterhood are at the very core of the hostilities…

The Sisterhood are (I think) a lovely thing that has become corrupted, a repository of all knowledge and a library of the history, science, art, philosophy, and all the collected wisdom of the ages for their people.

They are an ancient order, rather like nuns, existing before the civil war that split Illyr into the two camps of Diplomats and Miltary.
The idea was of a cloistered order, rather like the old religious orders of earth, focussed entirely on their stated purpose.

There will be a lot more about them in the second novel, so hold that thought.

Q10: Can you give us a little more about what we can expect in the next novel? Will we be finding out more about the invasion behind the invasion, so to speak?

Also (and I totally squirmed throughout the last bit of the novel), the parasitic organisms and how they came about in the first place?

SPOILER ALERT: Well, in the next novel Syl and Ani are on Avila Minor, the moon on which the Sisterhood reside, and Paul and Steven are off fighting in the Illyri battalions on other worlds, and we find out more about… well, I don’t think I should give anything away.

Suffice to say the canvas broadens, and the plot thickens!

Q11: And finally, can you tell us what it is that you love most about writing sci-fi for Young Adults?

I really do LOVE writing for this market. I think the YA reader particularly likes a cracking adventure, and audacious characters, and a bit of romance and a healthy squirt of anger and war, all the things I like in a book.

It’s tremendous fun, but also a little terrifying because there’s nothing worse for a teenager than being told stuff in a prescriptive, diadactic manner, or treated with precious kid gloves.

You need to show them, not tell them (to borrow a cliché); you need to draw them in but you can never talk down to them – that’s the part you desperately  hope to get right, and I hope we did by treating our readers as complete adults, but adults who are not yet jaded, grim and cynical. Adults with hope and passion.

The best kind of adults, actually.

Thanks for stopping by Jennifer. I had so much fun compiling these questions! 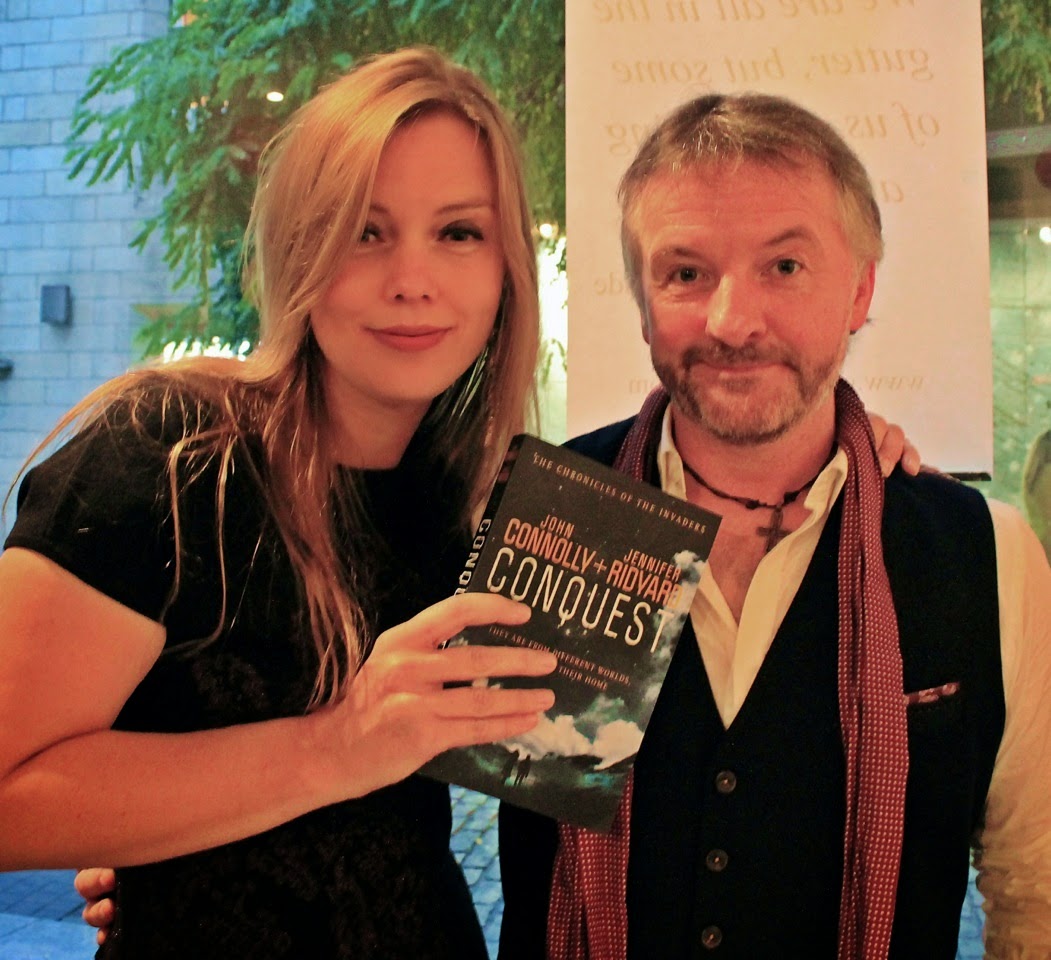 About Jennifer
Jennifer Ridyard was born in England and grew up in Johannesburg, where she worked as a journalist for many years.

Conquest is her first novel.