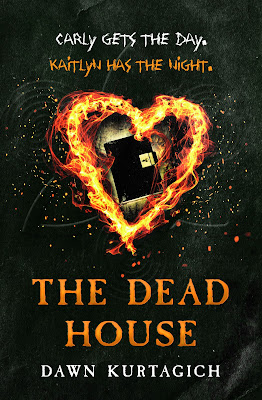 Once upon a time there was two girls where there (probably, maybe, definitely) should have just been one.

Disclaimer: Review originally appeared on Women24. A copy of the book can be purchased via Raru.co.za.

The Dead House by Dawn Kurtagich (first published in 2015 by Indigo, and imprint of Orion publishers)

Dawn Kurtagich’s The Dead House is quite possibly one the creepiest books I’ve read this year.

It’s a strong contender for one of my favourite books of 2015.

Described as being part psychological thriller and part urban legend, this novel reads like a gothic novel.  Darkly atmospheric  it has undertones of horror throughout.

This book messes with your mind in so many ways: from its inherent and underlying sense of impending doom to characters whose motives and reasoning border on the outskirts of the bizarre; and dark, ritualistic elements that serve to add a chilling and haunting air to the novel.

Told by means of transcripts, diary entries, video reports and interview and medical notes, the structure of the novel draws the reader in, immediately hinting at something off about this case.

Here’s what we know:

25 years ago Elmbridge High, a boarding school, burnt down.

Not much was known about the incident back then, except that three students were killed and Carly Johnson (suspected of being as much a victim as she was a suspect ), vanished without a trace.

Fast-forward a few years and a journal is found. It’s an account that belongs to a girl named Kaitlyn Johnson, Carly’s identical twin sister.

Here’s the kicker though: Carly never had a twin.

This book is rooted in urban legend, but also deals with dissociative identity disorder (previously known as multiple personality disorder).

Questions that will haunt you: Who is Kaitlyn? How did she come to be? Is she the one that’s real or is Kaitlyn a figment of Carly’s imagination?  Most importantly: what led to the fire that resulted in all those deaths?

Oh how I wish I could tell you, but let’s just say that this book went into a direction that I would never have been able to predict.

The fascinating thing about novels with unreliable narrators is that even though you know that you shouldn’t trust everything that they’re saying, you can’t help but want to believe in the version of truth that’s presented to you.

It’s a continuous tug-of-war,  one that Dawn Kurtagich pulls off effortlessly.

Read it. It will stay with you for a good while after you’ve read it. It’s still haunting me.
Email Post
Labels: book reviews dawn kurtagich horror ya fiction
Reactions: