Source: Review copy received from the publisher via Netgalley. You can purchase a copy of the book from Raru.co.za. 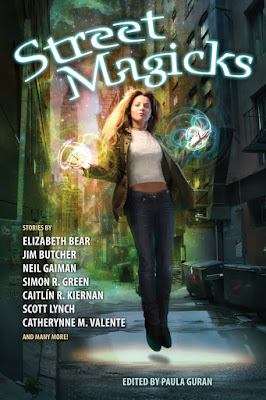 Streets are more than thoroughfares. Cobblestone or concrete, state of mind or situation streets are catalysts for culture; sources of knowledge and connection, invisible routes to hidden levels of influence.

In worlds where magic is real, streets can be full of dangerous shadows or paths to salvation.

Wizards walk such streets, monsters lurk in their alleys, demons prowl or strut, doors open to places full of delightful enchantment or seething with sorcery, and truly dead ends abound.

This selection of stories some tales may be rediscoveries, others never encountered on your fictional map will take you for a wild ride through many realms of imagination.
Review:

The book’s summary also didn’t hurt. I mean, who wouldn’t want to see wizards, warlocks and other fairy tale creatures roaming the streets; descriptions of magic thrumming in the air and running through their veins?

Unfortunately for me, this book didn’t quite live up to my expectations.

I certainly don't think this is a bad collection, but I just wasn't invested enough in the theme or the stories to continue.

A good collection of tales keeps the reader coming back for more, and despite the fact that there were a few good stand out stories - Kat Howard's Painted Birds and Shivered Bones for example (seriously, her writing is exquisitely detailed and the settings she chose perfectly fit in with the story she aimed to tell) - there just wasn't enough power to completely draw me in.

Some authors had interesting, if somewhat literal interpretations of the theme, while other authors, like Neil Gaiman for instance, took a more lateral approach and focused on how the characters related to the settings instead.

All in all it's a good read if you're looking for a read between reads, but if you really want an anthology that will have you gunning for more, do read Once Upon on a Time: New Fairytales edited by Paula Guran.
Email Post
Labels: anthologies books fantasy paula guran reviews short stories
Reactions: