Book review: Of Bees and Mist 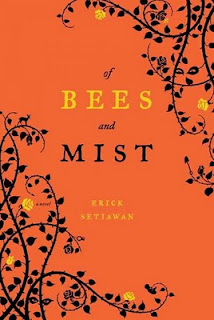 Of Bees and Mist
A tale pregnant with magic, myth and a mother-in-law straight out of hell.

In fact, let me say this right now - this book is - hands down - the best novel I've read this year.

Set in a fictional country which could have been anywhere and in any time, Of Bees and Mist speaks of a place that is enchantingly magical and is governed by the laws of magic itself. In a world where clairvoyants are revered and magic is practiced, demons and ghosts are always on the prowl and misty coloured dreams bewitch the souls of the inhabitants living in this fictional town.

The story focuses on Meridia, a young, withdrawn girl living in a sepulchral house where ghosts dwell in mirrors and blue and yellow mist (representing the palpable anger and sadness suffocating the household) surrounds the house with relentless tenacity.

With a mother who barely remembers she has a daughter and a verbally abusive and chillingly cold father, Meridia spends most of her childhood days in lonely isolation.

All that changes, when, at the age of sixteen, she meets and falls in love with Daniel, who quickly gives her a chance to escape from the misery she experiences at the hands of her father. But happiness usually comes at a price and Meridia soon finds out first hand that she's escaped one form of misery to enter into another form when she meets her prospective mother-in-law.

All sweetness at first, Eva seems to welcome Meridia into the seemingly warm household, but soon Eva's vitriol, which shows itself in the form of a swarm of violently angry bees, forces Meridia to come to the realisation that she'll have to take extraordinary measures if she wants to save her marriage.

The book has a misty, dreamlike quality to it that is impossible to put down. What makes this book so compelling to read is that the mystical, magical and supernatural forces at play are actually metaphorical representations of the various emotions at play in the various households.

And the MIL? The devil himself wouldn't want to marry her. She's that evil.

You'll want to read this book. It's a book Isabelle Allende would have wanted to write.