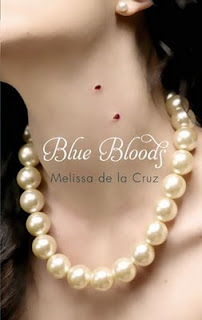 Raised by an imposing and aloof grandmother, Schuyler tries not to draw attention to her and tends to stick close to Oliver and Dylan, the 3 of them pretty much relegated to being the outcasts of the school.

But all that is about to change because:

a) Jack Force, the most popular (and by default the hottest and one of the wealthiest) has suddenly taken an interest in the ignorant-of-her-beauty 15-year old - a fact which upsets his equally popular, but bratty, spoilt and mean twin sister, Mimi.

b) That craving for red meat, the blackouts and the increasingly marked blue veins confirms that she's a Blue Blood - part of a secret elite group of vampires who are illustriously beautiful, extroadinarily powerful and exceedingly glamourous.

As a Blue Blood, she is invited to join The Committee, an elite society resided over by vampires, where she soon learns some startling information about her family history.

But that's not all.

The knowledge of what she is soon becomes dangerous to those around her and when young vampires are being hunted and murdered, and the Committee refuse to believe that it's a matter of life or death, it's up to Schuyler and her friends to find out who and what is behind the killings - before she and those around her become the next targets.

I liked this book far more than I ever thought I actually would.

I unashamedly loved this book and - even as I sit here writing this review - am still quite surprised that I'm actually going to be writing a great review for a book I was fully expecting to dislike. (I do love books that end up being far better than your actual expectations of it, don't you?)

I've seen this book around so many times, but had no intention of reading this book (and series) at all. I suppose my reasoning at the time could probably be put down as me becoming just a wee bit tired of seeing so many vamp books out there, that it didn't occur to me that this may just be a very different take on the genre.

And different this certainly was.

Now, normally I would be irritated with this kind of setting because I just know that with a setting like this, a lot of the characters are bound to be shallow, flaky and super bitchy - but somehow the setting for this novel just works.

And surprisingly enough, the characters, although not fully fleshed out (something which I think is deliberate due to the fact that this book is a series), had a little more substance to them than I thought they would have.

Told through different points of view, we get to hear the voices of Schuyler,  Mimi Force and Bliss Llewellyn (Mimi's so-called best friend).  Schuyler's character was the one that stood out most for me.

She's sweet, but she's no pushover and I love the fact that she's such a non-conformist amidst her very posh surroundings. Out of all three voices, hers grabbed me the most - she's likeable, brave and I found myself definitely rooting for her and Jack Force throughout the novel.

Surprisingly enough, I also liked Bliss. At first glance, you'd think she was every bit as shallow as Mimi, yet there was an inherent vulnerability about her that definitely won my sympathy as the novel progressed.

Mimi, on the other hand, I developed an instant dislike for. She's spoilt, bratty, mean and cares about no one besides herself and Jack.  And I couldn't help but want to strangle her throughout most of the novel.

As interesting as the history of the Blue Bloods are (it goes way back to the Mayflower landing), the relationship between Mimi and Jack was the one thing that freaked me out. Even though it is explained why, the notion of the two of them just makes me sick to my stomach.

And it's not because it could be considered incestuous (that's another controversial topic for another day and something I want to write about), but more because I want to see Schuyler and Jack together - even though, at times, his dog-like loyalty to Mimi just got on my last nerve.

And as much as I like Oliver (the super loyal best friend), I just can't help but pin my hopes on Schuyler and Jack as a couple! They just seem like they'd be really good together.

I also really found unique and refreshing, was the whole take on vampire mythology. Without giving anything away, it's definitely different from the standard vamp myth and because of this, provides a couple of twists in the novel that definitely makes me want to continue reading this series.

If you haven't read this one yet, give it a go - you may just be surprised!  It's a light, fast and mostly well-written read.

Anonymous said…
I absolutely love this series! I love Schuyler--she's adorable. So is Bliss. And sorry to break it to ya...that I-want-to-strangle-you feeling with Mimi never really goes away.
Jack+Schuyler all the way! :) Oliver's cute and sweet, but Jack is just...*drool*
I hope you enjoy the rest of this series!
August 14, 2010 at 11:28 PM

Gaby G said…
"no intention of reading this book (and series) at all" -- that was me before reading your review!

I am a little tired of vampires but now I have to read this book. It just surprised me how much you like it, and that you think it's refreshing and unique.

Leanna Elle said…
I love your review of this! I've been thinking of reading this series for a while, and I think this review might just have convinced me - especially since we seem to like a lot of the same books. Great review! :)
August 15, 2010 at 1:26 AM

Jan von Harz said…
I really need to read this series, I hear such wonderful reviews from each of the books and I need to find out just why it is so great. Loved you review, which makes me even more sure I need to get started on this series now.
August 15, 2010 at 3:25 PM

Aisle B said…
AH HA! Nice to see that this one impressed you even though you thought otherwise. It's those little surprises that make us come back with...Boy was I off.. and BAM O- READ IT reviews. You make me want to get this one and it not the type that I would consider normally... Now I guess I'll have to give a chance since you did too :)
August 15, 2010 at 6:42 PM

sarah darlington said…
I agree. I read this book this summer and was surprised to find it way better than I thought. Since then I've read on in the series. I liked books 2 and 3. But I just tried to read book 4 and never finished it. I'm curious to see what you'll think as you read on.
August 18, 2010 at 3:28 PM

brandileigh2003 said…
I actually didn't see this review when I posted in the I don't have to love your favourite book-- but reading your review, I might have to try it again. I did try to read it post twilight and nothing was good to me then-- even some that I have tried again and loved.
August 18, 2010 at 3:38 PM