A while back I read Beautiful Malice, one of the best YA psychological thrillers currently out there. Of course, seeing that I loved the book so much, I simply had to see if I could try and track down the author for an interview. Lucky for me - the book publishers I work closely with here in SA, were very happy to help!

So, without further ado, here is some info about the book, a link to my review and the author spotlight questions as follows. 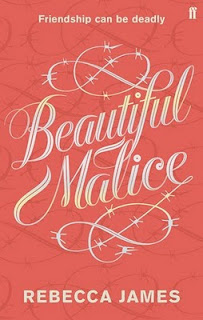 About Beautiful Malice
Following a terrible tragedy that leaves her once-perfect family shattered, Katherine Patterson moves to a new city, starts at a new school, and looks forward to a new life of quiet anonymity.

But when Katherine meets the gregarious and beautiful Alice Parrie her resolution to live a solitary life becomes difficult. Katherine is unable resist the flattering attention that Alice pays her and is so charmed by Alice’s contagious enthusiasm that the two girls soon become firm friends

But being friends with Alice is complicated – and as Katherine gets to know her better she discovers that although Alice can be charming and generous she can also be selfish and egocentric. Sometimes, even, Alice is cruel.

And when Katherine starts to wonder if Alice is really the kind of person she wants as a friend, she discovers something else about Alice - she doesn’t like being cast off.

(I was going to add the author pic, but Blogger is being a royal pain, so will have to try tomorrow again)
Author spotlight questions:

1. Beautiful Malice generated quite an extensive amount of interest in the publishing world. Can you tell us a little about your road to publication and how it came to be that Beautiful Malice resulted in the bidding war that it has?

The first book I ever wrote was published by a very small American e-press. I received a one hundred dollar advance and though that may seem laughable I was actually quite excited at the time. I think maybe about two people in the world read that book.

Then I wrote another two books and both of those manuscripts currently live beneath my bed. They are growing stale and dusty with neglect...

When I finished writing Beautiful Malice I started querying literary agents. I didn't want to submit directly to publishers because I'd heard quite a few scary stories about how badly publishers regard unagented manuscripts and I wanted my novel to have at least half a chance.

Getting an agent wasn't easy. I was rejected by over 70 agents throughout Australia, the US and the UK before Jo Unwin from Conville and Walsh agreed to represent me. In fact, after all those rejections I suddenly had two agents offer representation within two days. I was over the moon!

Jo and I worked together on polishing the manuscript and then submitted it simultaneously to Australian and British publishers. Within about three weeks we had an offer from Allen and Unwin in Australia and then a few weeks later another offer from Faber and Faber in the UK. It wasn't until it was submitted to Europe that it attracted a lot of attention.

The German publishers seemed to love it - and within a few days we had several publishers making offers. It went to auction (what a crazy week that was for me!) and eventually sold to Rowohlt. After that my agent submitted it to the US. The same thing happened again - another auction. By this time I seriously wondered if the world was playing some kind of cruel joke...

Apparently Beautiful Malice caused quite a stir at the Frankfurt Book Fair a few weeks later - and the book eventually sold into 36 territories.

I still pinch myself daily!

2.  Your novel deals with the harmful relationships and toxic friendships, something which I think so many of us can relate to. Have you had your own share of toxic friendships? And if so, did you draw any inspiration from your personal experiences for Beautiful Malice?

I think most writers draw from their own life experiences in their work. It doesn't mean you have to have had exactly the same experience, but it means you use your own emotions and feelings (and imagination) to try and create something that feels authentic and believable.

I have never had a friend quite as crazy as Alice (thank goodness) but I have certainly had my share of unhealthy relationships (not only friendships, but romantic relationships too).

I think the dynamic between people in a dysfunctional or toxic relationship is just a fascinating topic - one that I'd like to explore even further!

3. I found it so interesting that both Alice and Katherine each have such interesting layers to them. Both of them have secrets, yet the two of them couldn't be more different. Which character's background and story would you say was the hardest to write and why?

Hmmm - I wouldn't say one character's background was necessarily harder to write that the other although I suppose I did struggle a bit to try and provide at least some kind of reason why Alice might be as she is.

4. Katherine seems so much older than her years. Do you think that this is one of the reasons that your novel is considered to be suited to both the young adult market as well as the adult market?

I always find it hard to answer questions about whether Beautiful Malice is a YA or adult book - I think that's because so many different people have said so many conflicting things. I've had people say "this is absolutely NOT YA' and then others say 'this is not an adult book. It's definitely a YA' - so I guess the answer is I just don't know what it is - a crossover, I guess.

When it was being submitted by my agent to publishers a few of them rejected it as a YA novel because they thought it felt too 'old' - in that it had the feeling that the story was being told by an adult looking back on her life.

So, yes, your suggestion that Katherine's maturity may explain why it appeals to adults as well as teens seems spot on. (Or as good as any other answer I could come up with!)

5.  What are your thoughts on book-to-movie adaptations? Would you welcome the idea of Beautiful Malice being made into a movie? And if so, who would you cast as Alice?

I would absolutely LOVE for Beautiful Malice to be made into a movie. It would be a real thrill. And I have to admit that I have no idea who I'd cast. All of the actors I admire are far too old, someone much younger and cooler than me would certainly have to do the casting!

6. I am so incredibly fascinated by Alice. Her final act seems as if it's both an act of revenge as well as one that stems from a desire to self-destruct. Would it be accurate to say that you left some of her actions open to the reader's own interpretation?

Yes, of course. A lot of the book is open to the reader's own interpretation - as most stories are. Personally, I feel a bit sorry for Alice and I don't hate her at all.

But then, I've had a lot of readers say they absolutely hate her and would love to stab her eyes out with a fork - everyone brings their own subjective experience to the reading of a book, which is part of the magic!

7. What is the one thing you'd like readers to retain and carry with them after reading Beautiful Malice?

I don't write to teach lessons or to preach or anything like that - so really I just hope they enjoy the experience of reading the book. It would be a bonus if they enjoy it enough to look forward to my next book!

8. You're a mother of four boys. How do you manage to juggle motherhood and writing? Do you have a specific schedule that you adhere to?

All my boys are at school now so I try to write during school hours. I'm good at ignoring the housework and sometimes it can be a bit embarrassing if people drop in unexpectedly and it looks like I'm just slobbing around in my pyjamas in a messy house. 'I'm working!' I want to say.

9. Your next book is called Cooper Bartholomew Is Dead. Can you tell us a little about the book and what it's about?

Well, it's working title has been Cooper Bartholomew is Dead but that may very well change before publication date. It's about love and lies, suicide and murder, drugs and revenge and courage... there may even be a ghost, of sorts.

10. Finally, besides Beautiful Malice, what's the one book that you've read this year, that is an absolute must-read?
I've just finished reading Never Let Me Go by Kazuo Ishiguro. I think everyone should read that and then go and watch the movie

Kelly aka yllektra(I Work For Books) said…
Oh that was a great interview!!
I have heard a lot about this book, but I haven't had the chance to read it yet.

I think it is interesting that the book is not austerely described and labeled as YA or adult, because this way both "audiences" will have the chance to read it, without being influenced by labels.

Jenny said…
Fabulous interview Tammy and Rebecca! I remember reading your review of this one and being really excited to read it. I've yet to get there, but it's definitely in my pile and this interview has me even more ready to start it. I'm very curious about Alice, she sounds like an absolutely intriguing character and now I want to know what her final act was:) I'll be keeping an eye out for the temporarily titled Cooper Bartholomew book as well. Thanks ladies!
November 16, 2010 at 11:53 PM

Aisle B said…
Another amazing interview. Tammy you have a knack to getting to the heart of the matter and tap into the essence of the writer's energy.

Bravo! Love the segments with the author interviews.. keep them going since they add so much more to the overall experience of the book.
November 17, 2010 at 1:46 AM

Straylights said…
Great interview! I just finished reading this book a few days ago, and yeah I loved/hated Alice. I hope she comes out with her new book soon, I would love to read more things by her!
November 17, 2010 at 2:15 AM

Gaby G said…
Thanks for the interview! You know I loved this book >D