Guest post & giveaway: Ghosts of Christmas past by Anastasia Hopcus

As part of the December Shadow Hills blog tour, I'm very excited to be featuring Anastasia Hopcus on my blog today. In today's post, she'll be giving us a little more insight into Toy's (one of my favourite characters in the book) crush on Graham. 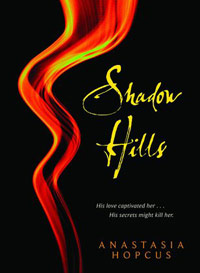 About the book:
After her sister Athena's tragic death, it's obvious that grief-stricken Persephone "Phe" Archer no longer belongs in Los Angeles.

Hoping to make sense of her sister's sudden demise and the cryptic dreams following it, Phe abandons her bubbly LA life to attend an uptight East Coast preparatory school in Shadow Hills, MA -- a school which her sister mysteriously mentioned in her last diary entry before she died.

Once there, Phe quickly realizes that something is deeply amiss in her new town.

Not only does Shadow Hills' history boast an unexplained epidemic that decimated hundreds of its citizens in the 1700s, but its modern townies also seem eerily psychic, with the bizarre ability to bend metal.

Even Zach -- the gorgeous stranger Phe meets and immediately begins to lust after -- seems as if he is hiding something serious. Phe is determined to get to the bottom of it. The longer she stays there, the more she suspects that her sister's untimely death and her own destiny are intricately linked to those who reside in Shadow Hills.

You can find my review of the book here.

Without further ado, here's Ghosts of Christmas Past by Anastasia Hopcus.  With special thanks to Anastasia and the wonderful team from The Teen Book Scene for allowing me to host Anastasia on my blog today.

“Hey! Toy!” My brother was the first one to spot me as I stepped into our family’s apartment, wheeling my bag behind me. He gave me a quick hug, then mussed my short pixie cut. “I see you're still wearing your hair like me.”

He struck a faux model stance while artfully arranging his mess of black hair---that I had to admit did look similar to my own. I’d always wanted to be just like my brother when I was younger, but now I wondered if that was part of the reason Graham only saw me as a buddy.
“Shut up.” Maybe I did look too much like him. I elbowed him in the side a tiny bit harder than I usually would have and instantly felt bad. It wasn’t my brother’s fault that my crush had a girlfriend and was not remotely interested in me.

“Oww!” He retaliated with a noogie.

“White flag! White flag!” I gave the old signal that I’d had enough rough housing. My brother gave me a playful shove and then headed into the kitchen as I rubbed the now sore spot on top of my head.

“Not even back for a minute and already beating on each other.” My dad stepped into the kitchen doorway, holding a dish towel, and opened his arms. "Welcome home!"

I slipped off my backpack and went to hug him.  I stepped back and looked pointedly at Dad's ‘Kiss Me I’m Irish’ apron. “Nice. Early Christmas present from mom?”

“Are you kidding me?” My mom called from the kitchen. “I was begging him not to get it, but then the saleswoman chimed in with how much he needed it and, well, you know your father.”

“Yep.” I followed him into the kitchen and made a beeline for the oven. “And since I know him so well, I’m guessing that amazing smell is his famous Christmas candy.”

“Stay out.” My dad swatted at me with the towel. “They’re for the party at the Gallery tomorrow night and they haven’t set yet.”


“Hi sweetie.” My mom gave me a kiss on the top of my head. She had to stretch onto her tiptoes to reach as she was petite even for the Korean side of my family. “I’m so glad you’re home.”

“Yeah, me too.” I smiled. I was glad to see my family and smell the wonderful Christmas cooking my dad took so much pride in, but it had been painful leaving Graham at the train station in Boston. Not that it was painful for him---soon he’d be in San Francisco and until then he was going to be hanging out in Boston with his girlfriend.  I wasn’t even sure he realized I was a girl.

My mom wrinkled her brow as she looked at me intently. “Let’s go have a little girl talk in the living room. Cooking is a guy thing anyway.” She nodded toward my dad and brother.

“Fine.” I followed her back the way I’d come in. “But I have my heart set on candy.”

“Don't worry. Your dad has it all planned.  First we're going skating and then we'll come back and pig out on his candy.  Plus, he's already put some in the freezer for you to take back to school.” She winked as she pulled me down on the sofa beside her.

She tilted her head, looking at me. “So what’s going on? Is your first year not going so well?”

My mom knew Graham was my friend but I hadn’t told her about my crush on him yet. Not because I thought that she’d have an issue with it. My grandma had been hard on her for years about marrying my dad instead of a nice Korean boy, and she’d never do the same thing to me. In fact, my mom had been telling me to follow my heart since I was in elementary school.

I hadn't told her because I was embarrassed.  I'd never been the kind of girl that got a crush on every guy she met.  I was friends with plenty of guys---not that surprising for someone who's into computers and video games and horror flicks---but that's all they were.  Friends.  I hadn't ever had those talks where I told my mom all about my latest crush.  My latest crush was my first.

The other thing was that I felt guilty.  Last night I'd sat around wishing that Graham and I would get snowed in at the dorms and have to spend Christmas together. That seemed so harsh---like I didn’t even care about my family, when in reality I cherished every memory of us falling on our butts ice-skating at Rockefeller center.  It was just…

"There's this guy,"  I blurted out, surprising myself a little.  "Graham."

"The boy from California?"  My mother smiled, and there was this knowing look in her eyes.  "So you do like him."

"That's just irritating." I frowned.  "How did you know that?  I never said anything special about him."

"It was the way you said nothing special about him."  She laughed and took my hand.  "Okay.  Now tell me all about him.  Everything.  I've been waiting years for this."

"Well, he has blonde hair and it's all kind of tousled and messy, and one of his front teeth has got this adorable little chip in it, and…"

Before I knew it, I was telling my mother all about it, from the time I first saw Graham at orientation to our casual parting at the train station in Boston this morning.  And then she was telling me how lucky Graham was that he had a girl like me interested in him and that one day he would wake up and see how special I was and if he didn't, well, he was the one who had lost out, not me.

I laughed and snuggled up against her, leaning my head on her shoulder like I had when I was a little girl.  "You have to say that because you're my mom."

"Well, yes, but that doesn't mean it isn't true."  I couldn't see her face, but I could hear the smile in her voice.

I sat there, my mother's arm warm against my cheek, the familiar scent of her perfume mingling with the delicious odor of chocolate stealing in from the kitchen.  I heard the rumble of my dad's voice and my brother's laugh in response, and I smiled.

Suddenly, I realized, I didn't feel stupid or guilty or embarrassed anymore.  I didn't wish I had been snowed in at Devenish, even with Graham.  It was Christmas, and I was right where I wanted to be.  At home.

And now, time for a giveaway. You can win yourself a signed Shadow Hills Poster.  To enter the giveaway, simply click here and provide me with all your relevant details.

Rules:
- Open to US residents only. (Sorry fabulous international blog friends)
- Giveaway runs until December the 14th.
- You don't have to be a follower to enter, just simply submit your full name and address as well as a means of contacting you.

And finally, be sure to check out all of Anastasia's blog stops over here.

Leanna Elle said…
Such a cute post. I love Toy and Graham. One of my favourite things about Shadow Hills was the depth of characterisation. I felt like I knew each and every one of the characters, even the secondary characters! I can't wait to read more from Anastasia! :)
December 7, 2010 at 4:03 PM

Jenny said…
Loved this story! Toy is one of my favorite characters from Shadow Hills and I'm dying for a little more time with her and Graham:) I'm especially a fan of the line about cooking being a guy thing since I'm miserable in the kitchen and my husband is pretty darn good, so I'd have to agree! Thanks so much for sharing Tammy and Anastasia!
December 8, 2010 at 6:05 AM

Aisle B said…
This is pretty sweet with Christmas being just days away.

Thanks for passing by Tammy's place and sharing your Christmas cheer with us Anastasia.