Side note: A shortened version of this review originally appears on the women24 website, which you can find here.

Update: This is a repost, because I just realised that I actually haven't featured the next book in the series after all this time - which is what will appear next on my blog.

Women24.com is a South African women's lifestyle website where I work as an online journo and where you can check out a host of other book reviews that we feature regularly... for those curious, I'll do a more in-depth post about what it is I do for a living very soon. 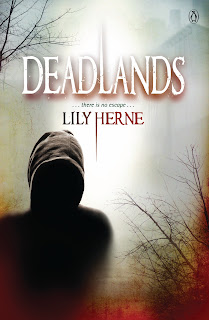 Deadlands
Young Adult satirical zombie fiction has a new home. And it's right here in South Africa. And yes, you should get a copy.

Deadlands by Lily Herne (Penguin Books SA)
17-year old Lele and her brother are stuck and living with her parents in the city enclave.

It's one of the few safe places following both the war and the appearance of the Zombie menace that has been ravaging the Deadlands (the area designated as unsafe and outside of the enclave) ever since.

Beneath the so-called veneer of safety, Lele can't help but notice that there's something sinister about the Guardians who keep a strict lockdown on the people who live within the enclave.

Stuck in a school run by the Ressurrectionists, a fanatical cult who worship the Guardians, Lele doesn't seem to have a way of escaping…

… At least not until, by some fluke (or is it luck?), she ends up being one of five aspiring teens that end up being selected by the Guardians in a staged human Lottery (which takes place every year).  No one knows why the Guardians want these teenagers so badly or what they do with them, but Lele is certainly about to find out.

My thoughts:
As a huge fan of the Young Adult fiction genre, I've always wondered why our fabulous South African authors don't plug into a genre that is so hugely popular around the world right now.

Thankfully, my book prayers were answered and mother-daughter duo, writing under the author name of Lily Herne, have both written a phenomenal new offering for lovers of Zombie fiction; adding a uniquely South African twist that is sure to make this book a hit with everyone.

Set in post-apocalyptic Cape Town (as I'm from Cape Town), this book is remarkably easy to relate to.

One of the most surprising things about the novel, is that in spite of it having a zombie focus, it was a rather light-hearted read with plenty of amusing moments in between.  And as someone who isn't a big fan of gore, this ended up being quite a plus for me.

What makes this novel really unique though, is the clever and no-holds barred, satirical barbs about South Africa's past and current political infrastructure scattered throughout the book.

To international readers, you don't necessarily have to have an understanding about South Africa's history, but if you do, then you, like me, will find the satire very, very clever.

With references to the very controversial Julius Malema (Lele's forced to go to a school called Malema high -) and political party, ANC (Lele joins the ANZ (Anti-Zombians) movement - an ode to the ANC before it became what it is today), it becomes obvious that there are two opposing sectors that will no doubt be heading for battle.

On the one hand, you have the Guardians and the Ressurrectionists who believe that they are doing the best for the people and giving the people what they "need" - just as long as people don't rebel and question them (Sounds like the ANC today doesn't it?) .

On the other hand, you have the ANZ movement - a resistance movement that are fighting for the people's rights and are forced to use violence as a method of trying to get their message across.

In a way, there is an underlying sense that almost feels as if you have the same faction fighting against itself and all it used to stand for. Again, this relates back to just why I think adults will probably also enjoy reading this.

The writing of the novel, for the most part, flowed quite seamlessly.

One thing I have to address, is the criticism that chapters are structured in such a way that it employs that age-old tactic of ending off with a line that forces you to continue on to the next page.

People seem to have a problem with this, and while I, agree with them in terms of some of these lines being relatively cheesy, I think it's an effective strategy to keep the reader reading.  It certainly kept me reading and wanting to find out what would happen next.

What did bother me though was the use of repeated vocabulary. I understand that words often do get repeated, but for me, it does become bothersome when I actually start noticing it.

Still, I thought the characters were incredibly strong, and Lele in particular, has a can-do, and don't-need-a-boy-to-take-care-of-my-problems kind of attitude that is incredibly refreshing to behold in the Young Adult genre spectrum.

The secondary characters and the introduction of the Mall Rats (I can't reveal more without spoiling for you), gave this novel an added kick in what really transformed itself into not just a zombie novel, but an action-packed zombie novel filled with a lot of adventurous moments.

There's also a potential love-triangle, which, although wasn't a major focus, gives us an idea that we might just get to read more about it in a possible sequel.

For all of the action though, there were and are still a lot of questions that I would have liked to have seen answered. For example, we know that there was a war, and that there was a zombie plague, but there's no explanation as to why the war took place, where the zombies came from and how they were formed from the start.

But, in spite of these minor plot holes, I think that this is a great start in a genre that more South African authors should look into. And as a reader who certainly never use to enjoy zombie fiction, I myself was quite taken aback by just how much I enjoyed it.
Email Post
Labels: 3.5 stars book reviews paranormal realistic young adult fiction
Reactions:

Aisle B said…
Wow this one takes place in South Africa, now that is a rarity for YA zombie tales.

Would you believe I have yet to embark on the zombie trails... so maybe this is the one to start with.

Jenny said…
I'm usually not a big zombie fan - they tend to freak me out (I'm a wuss), but this one sounds like it has some really well developed characters and I like that it's set in Cape Town:) The each-chapter-ends-with-a-cliffhanger thing is a bit irritating, but it would certainly keep me reading as well, so I guess it's effective:)
April 17, 2011 at 3:57 PM

It's a Book Thing said…
Great Review as always! Tarryn enjoyed this SA read. I have to give it props - SA taking on the Paranormal *Hugs SA*. I think a book like this has to taken into schools and read as a set work (Actually Tarryn thinks that but we are one blog!)

Loving that you back!

Jan von Harz said…
While I am not a huge fan of the zombie gnere, this does sound interesting mainly because of the setting. However I too would have difficulty with the repetitive nature of the vocabulary. Great review!
April 18, 2011 at 12:11 PM