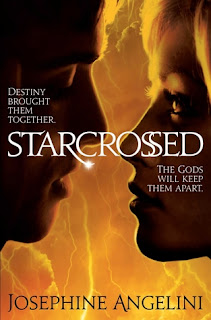 How do you defy destiny when you and the one person you've fallen in love with, are fated to play the primary roles in an ancient and tragic cycle that has repeated itself throughout the course of history?

Shy, chronically awkward and incredibly beautiful (trust me, this is not as clichéd as it sounds), Helen has always lived with the knowledge that she’s different.

When she first sets her sights on the blisteringly attractive Lucas Delos, her safe world is suddenly shattered when she tries to kill him in front of the entire school and learns just how different she really is.

Plagued by both an intense hatred and attraction towards the undeniably good-looking Lucas, the painfully shy Helen soon becomes convinced that she's going stark raving mad when she starts seeing ghostly spectres of three women (weeping bloody tears) whenever she's near Lucas or any of one of his family members.

It doesn't take long for her to learn that, like her namesake Helen of Troy, she's ill-fated to start a war by falling in love with the one person she seems to, at first, violently loathe.

When that mutual loathing soon blossoms into love, Helen and Lucas will need to make a decision that not only impacts their lives, but affects the lives of the ones they love most.

Desperately attracted to one another, tied together by a star-crossed fate running parallel to the lives of Helen and Paris, and kept apart by long-ago truce established by the gods,  Helen and Lucas will have to decide just how much they are willing to give up to risk being together.

When I first heard about Starcrossed, I couldn’t help but be both nervous and excited about this book.

Being a huge lover of mythology (Greek mythology in particular), I have to admit that I always tend to be reluctant when it comes to reading modern adaptions or books that base their story line on classic Greek myths.

After all, even though mythological retellings seem to be all the rage these days, it's not everyone who can capture its fundamental essence.

Not only does she utilize one of the best known Greek myths today, but she takes the story, puts a modern spin on it and makes it her own while staying true to the very nature of Greek mythology in all of its sweeping, haunting, tragic and romantic splendour.

Combine those fantastic elements with her captivating writing skills, her innovative plotline and a cast of believable, highly likeable and totally swoon-worthy (in the case of Lucas), characters, and you'll get a basic idea of just what you can expect.

Even better? She does so in a way that isn’t confusing to those who haven’t read anything related to the classic mythology.

When we meet Helen, we first come across a girl who is incredibly shy and introverted. To many she may have been decidedly annoying, as it does seem as if she could be another Bella just wrapped up in someone else's name.

This was not the case - and Josephine proved this so beautifully as we got to know Helen and see her growing from strength-to-strength in both character and physical prowess.

Once she really begins to own her abilities, being witness to her transformation becomes such a pleasure to read.

Josie's introduction into the world of gods, truces and the history behind Helen's star-crossed heritage was incredibly fascinating and for me, felt as if she completely brought a story rooted in the ancient days, so vividly and vibrantly alive.

The feud, the introduction to the three fates, the Oracle and the different Greek houses are all explained beautifully and adds to a feeling of the insurmountable obstacles that Lucas and Helen have to face.

What really gives this story its packing punch is the characters – both those with good and evil intent.

I often liken the Greek gods and characters to fairies – fickle, capricious and incredibly unpredictable. In Starcrossed we are introduced to quite a few characters that not only embody volatility, but also lead the reader right into a position of not being sure whether or not to trust their intentions.

There’s something about her that seems rather off. She appears to want to protect her daughter, but her motives aren’t entirely pure. I get the feeling that she’s the sort that you don’t want to turn your back on.

The other characters were equally as interesting, and I found that I really enjoyed reading about Helen’s friendship with Claire (the petite and ferociously adorable Asian girl who’s been her best friend since childhood), her getting to know Ariadne, Hector, Cassandra and Jason (Lucas’ relatives) and of course, the growing attraction between her and Lucas.

I think Lucas is the kind of guy you can’t really give a description to. You need to read about him in order to experience him. Suffice to say, I found myself swooning several times at this boy’s obvious charms.

The romance between him and Helen are what every Greek mythology is: romantic, desperate and doomed. You’ll find yourself rooting for everything to work out between them, even though they’re facing the most challenging of obstacles.

The chemistry between them are just sizzling and with his protective nature, you can’t help but sigh at the more romantic scenes between them.

With opposing forces threatening Helen’s life, a romance destined to end before it even starts and a heritage only beginning to be uncovered, Starcrossed is a book that will keep you on your toes and having you waiting with bated breath for Dreamless, the next book in the trilogy (which thankfully, is out right now and is a book I’ll be reading and reviewing shortly).
Email Post
Labels: book review Greek mythology josephine angelini romance young adult fiction
Reactions: Location: Cape Town, South Africa

Dazzling Mage said…
You're right, the description does make me a little nervous that it might be another Twilight love- the tug of "oh we should be together no matter what" can turn characters into selfish children..but having said that, I do love reading about Greek mythology re-tellings, so I might be picking this up.

I'm also South African and have a book blog: www.blogofabookaholic.blogspot.com

I'm also South African and have a book blog: www.blogofabookaholic.blogspot.com

Anonymous said…
This is a fantastic review, Tammy! I actually feel like rereading Starcrossed now. I can't wait to read what you have to say about Dreamless :)
August 22, 2012 at 7:13 PM