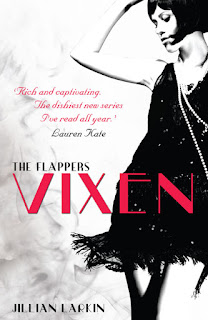 Disclaimer: This review can also be seen featured on  Women24.com, a South African women's lifestyle website where I manage, amongst other things, an online books section.
Vixen
The rip-roaring 1920s comes alive in a novel that focuses on three girls trying to make it into the high-flying world of Chicago's jazz-fuelled and Flapper society.

While I do love my fair share of historical fiction, I find that I don't read the genre very often; something I really should change.

When I chose to read Vixen, it was with the intention of just filling up a reading void while on a break from my usual favourites.

My expectations of Vixen were very low to begin with, so you can imagine my surprise when I found that I had to swallow all my preconceived notions as I found myself not only being completely enthralled by the story, but also being thoroughly, thoroughly invested in the lives of the characters.

In short, Vixen is an absolute gem of a novel.

I had no idea that books set in the sexy and jazzy 1920s could actually make for such a titillating read. Having not really been a fan of Flapper period-based novels, Vixen is the book that now has me wanting to read more books set in this period.

It's a metropolis of unlawful activity.

From illegal speakeasies and alcohol consumption, to the Mobsters who rule the dark, smoky and sensual underbelly of the city, Vixen explores the era when the Prohibitions Act was alive and well, in all of its glittery, seductive and seedy opulence.

You'll fall in love with the glamour and the ra-ra-ness of it all.

Think about fabulous descriptions of the gorgeous fashion to the ostentatious parties thrown by the flashy nouveau riche, and you'll definitely have a sense of just what you can expect from this smoky and swoon-worthy historical read.

At the age of 17, everyone thinks that Gloria has it all. She comes from one of the most prestigious families in Chicago, is a gifted student and is engaged to Sebastian Grey, one of the city's ultimates in Blue Blood breeding.

Despite it all, our dear Glo longs for more than the life she's living. Stifled by the stiff and rigid rules she's forced to live by, Gloria yearns to be part of the flapper lifestyle. From the sleek and bobbed hairstyles to the sensuous jazz music that forms part of the nights at local speakeasies, Gloria wants to have fun.

Clara, Gloria’s cousin arrives in Chicago to make sure that the wedding of the year goes off without a hitch. Presenting herself as the picture-perfect good girl, Clara hopes to make a brand new start away from a past filled with nothing but heartache, secrets and pain.

Finally, there’s Lorraine, Gloria’s loud and outspoken best friend. Tired of living in her friend’s shadow and desperate to get the boy of her dreams to notice her, Lorraine will do anything to get her way.

Combine three girls who each have different ambitions and aspirations, add a cauldron of scheming, forbidden trysts and run-ins with mobsters and you’ve got yourself one dazzling and dishy read.

Switching between the three girls’ point of view, we as the readers, are given a chance to get to know each character very well. The dynamic and different personalities are rather striking in their differences, and is one of the biggest aspects that lend this novel its packing punch.

The underlying tensions, jealousy and catfights give you an idea that these girls won't let anyone stand in their way. Lorraine in particular, is nasty and spiteful. Yet, for all of their flaws, Lorraine's in particular, you can't help but root for each and every girl to find what she's looking for.

At the end of the day, underneath all the so-called superficial layers, these girls are incredibly soft, vulnerable and just want to follow their dreams. Sure they often tend to be misguided and do incredibly stupid things, but that's what forms part of their charm.

An added interesting aspect of the novel is the interracial romance between Gloria and one of the black jazz musicians she meets at a speakeasy.

The 1920s was a period where the drinking and distribution was not the only thing that was considered illegal, but where relationships between people coming from different ethnic backgrounds were more than frowned upon.

And Larkin handles the simmering and sensual tension between Gloria and Jerome with a subtle intensity that will have you cheering and hoping for a happy ending for the two.

Clara herself proves to be an especially interesting character. Watching her suppress her natural persona and putting on act will leave you wondering just what the secret is that she's so desperately trying to hide.

Added to the drama is the fact that Marcus, the boy Lorraine is trying so hard to catch, starts showing an interest in her.

Naturally you can only imagine the big hoo-ha that ensues.

There are so many fabulous things about this novel, that it's really hard to go into everything in any more details than I already have.

The one thing I can tell you is that when you read this, you should be prepared to be dazzled by the intoxicating settings, the beautiful writing and the devious twists.

Oh, and the best thing about this? It's part of a trilogy.

And with the way things ended in this novel, I can't wait to see how these girls fair in the next two books.

Dazzling Mage said…
I think I had a similar mindset not having read it-- expectations are not high.

BUT after reading your review, I am so curious that I want to read it!