Book review: The Other Life 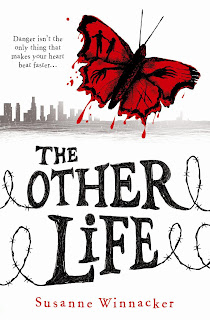 Disclaimer: This review appears on Women24.com, a South African women's lifestyle website where I manage, amongst other things, an online books section.
The Other Life by Susanne Winnacker (Usborne)
It's been a good while since I've read anything dystopian, so when The Other Life arrived on my desk for review, I couldn't help but be intrigued.

Having come across it on previous occasions, I actually didn't realise it was a work of speculative fiction until I really paid attention to the synopsis (I previously just skimmed through it, so didn't actually have a real sense of what the book was about).

And was I surprised by how much I ended up enjoying this!

I think the reason for this is that with so many works of dystopic fiction saturating both the Adult and Young Adult market, The Other Life does, at first, seem like just another non-descript, post-apocalyptic novel no different from the rest.

While it certainly follows a formula that make up some of the common characteristics of the genre, what sets this book apart is, that for such a relatively short novel, it actually packs quite a punch. It's jam-packed with action, great characters and offers an interesting twist on zombies.

Better yet, even though it tackles a genre that's more known for its much darker and moodier elements and atmosphere, The Other Life actually manages to add a component of fun to the novel, all without the book losing any of the essence of its genre.

The novel starts off when we meet Sherry and her family.

Living in a sealed bunker (really just a fancy term for basement), it's been more than 3 years since they've dared to venture outside. Closed off from the world outside, they've always managed to make do - at least until the inevitable happens and they run out of food.

With no other option left, Sherry and her father are forced to venture outside in search of other people and to see whether or not they are able to find any food sources.

What they find instead is a city ravaged by destruction and a landscape devoid of human activity.

There's not a soul in sight...at least not until they reach an abandoned store where the action really begins.  While on the hunt for food, their scavenging is interrupted when they are attacked by zombie-like creatures thirsting for their blood.

Sherry manages to escape (with the help of the gorgeous but haunted Joshua), but her father isn't so lucky and ends up being snatched by one of the zombies (aka The Weepers).

What follows is a desperate hunt for her father (before he becomes one of a mutant Zombie... or worse), a quest to save and keep her family safe and of course, dealing with her growing feelings for the boy who's consumed with his desire to kill every single weeper out there.

With books like The Hunger Games and Veronica Roth's Divergent proving to be bestselling reads, speculative fiction has proven to be quite a popular genre. In fact, this genre is one of the predominant categories found in YA fiction, so it's no wonder that more and more authors are jumping on the dystopian bandwagon.

Susanne Winnacker's The Other Life is another one of the many books that can be added to this particular genre - and while it's not in the same league as the aforementioned reads, it still makes for a very entertaining read.

What I loved about the book, is that Susanne takes a seemingly simple plot idea and adds a few interesting and unexpected elements  to the book that took me completely by the surprise - especially regarding to how the title of the book comes into play.

I certainly have to admit that I didn't give a thought to why the book was called The Other Life, until towards the end of the novel, when certain revelations are revealed.

The details and reasons behind the existence of the Weepers are quite sparse, and are at times a little frustrating, but since there is a sequel coming out next year, I'm hoping that there are answers to some of the most important questions I have.

What we know is that there was a virus developed by the government. The virus mutated, spread and resulted in mutant-like creatures running rampant.  Very few reasons are given and all the events prior to what has happened, is shrouded in a veil of secrecy.

Was this deliberate? Is this a government ploy to create anarchy?

It's questions like these that have me desperately hoping for answers in the next book.

Character wise, Sherry and Joshua made for a great team.

Since the novel is relatively short, I couldn't help but feel as if I didn't get to know them as well as I would have liked.  I do, however, suspect that this could probably have been deliberate on the author's part and that we'll get to see some more character development and insight into their personas in the next book.

I loved the chemistry between Sherry and Joshua and have to applaud Winnacker for creating a male protagonist who doesn't treat the female character as if she's unable to fend for herself.  Sherry is one gutsy, kick-ass heroine who refuses to give up without putting up a fight.

Pretty much my favourite kind of heroine, really.

Combined with plenty of heart-stopping moments filled with action, weeping zombies and a promising introduction to a great cast of characters, The Other Life makes for a thrilling read and will have you waiting in breathless anticipation for The Life Beyond, the next book in the series.
Email Post
Labels: book review dystopian fiction susanne winnacker the other life young adult fiction
Reactions: Location: Cape Town, South Africa