Book review: Wicked as They Come by Delilah Dawson

In today’s mini reviews feature, I share my brief thoughts on Deliliah S. Dawson’s  Wicked as They Come.

Source: Purchased a copy of the book through Raru.co.za. 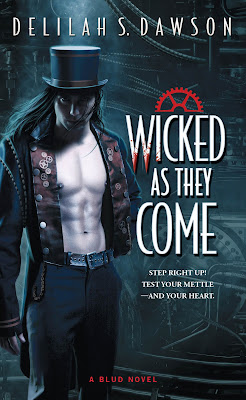 When nurse Tish Everett forced open the pesky but lovely locket she found at an estate sale, she had no idea she was answering the call of Criminy Stain, from the far off land of Sang.

He’d cast a spell for her, but when she’s transported right to him, she’s not so sure she’s ready to be under the spell of another man.

(It didn’t go so well last time with controlling, abusive, domineering Jeff.)
If only Criminy wasn’t so deliciously rakish….

Half the inhabitants of Sang are Pinkies—human—and the other half are Bludmen, who in Tish’s world would be called vampires. But they don’t mess with any of the bat/coffin/no sunlight nonsense.

They’re rather like you and me, just more fabulous, long living, and mostly indestructible. (They're also very good kissers.)

But when the evil Mayor of Manchester (formerly Bludchester) redoubles his efforts to rid Sang of the Bludmen once and for all, stealing Tish’s locket in hopes of traveling back to her world himself for reinforcements, Criminy and Tish must battle ghosts, sea monsters, wayward submarines, a secret cabal, and thundering Bludmares to get the locket back and allow Tish to return home…but has she found love with Criminy?

Could she stay in Sang forever?

What I thought of the book:
Look, I’m not going to lie. While I certainly fell in love with the synopsis of the book, a huge part of me bought this book because of the cover.

I mean, just look at that beautiful man, right? In fact, I’ll give you a moment…

Of course, I just had to pay for my momentary weakness because I read up until page 94 and just couldn’t finish the rest.

There is no doubt in my mind that Delililah Lawson is an incredibly awesome writer. In fact, despite me not finishing this book, I’m definitely planning to read more of her work. I mean with the concept that she’s come up with, how could I not want to?

Think gypsy vampire, add a travelling circus that employs both  human and mechanical clockwork creatures, and shake things up by including a young nurse who gets to time travel and experience this and so much more.

There was no way that this book couldn’t be anything but a winner in my eyes. Except, somehow it just failed to live up to my expectations.

You see, the problem for me though is that with some steampunk fantasy novels, I often find that so much time and dedication is spent on creating a believable, eccentric and off-the-beaten-path kind of  setting, that character development tends to suffer for it.

Unfortunately, this has been my experience with Wicked as they Come. Bohemian settings, intricately detailed descriptions of clockwork creatures there were aplenty, but the characters and character chemistry? Felt rather flat to me.

And because I got bored with the characters and their story as a result of this flatness, I also lost interest in the setting and eventually the story itself. A pity because I think this would have been an otherwise awesome book.

But, don’t let me dissuade you – there are plenty of people I’ve seen who love this book.