So I’ve been meaning to do this post for some time now, but life, as you know, has a way of interrupting and as a result, this post had to take a bit of a backseat.

But without further ado, it’s time to announce the winners of the A Court of Thorns or Queen of Shadows (depending on the reader’s choice).

In the last post, I asked you to recommend a fantasy novel that you think more people should know about.  I’ve gotten some great responses in return and thought I’d share them in this post, along with the winner details.

In no particular order, here are the novels that, based on your recs, I’ll definitely be checking out: 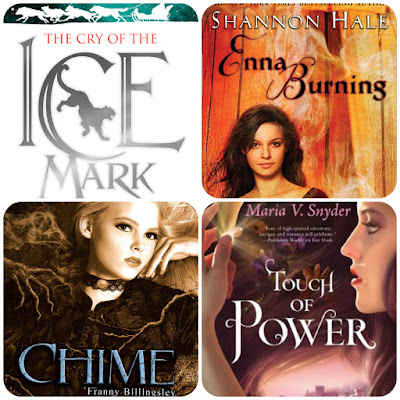 Tracy: Man of his word by Dave Duncan. Not given good press but it is a good read.

Yun-A:  This is hard but I would have to say Elizabeth C. Bunce's Star Crossed series. It's a set in a fantasy world, much like Throne of Glass and the world is amazing.

Nicc209: This is hard... I'd say the Healer series by Maria V. Snyder, the first book being Touch Of Power. I never see them in store, only online! But they're very good books!

Maria: I vote for The All Souls Trilogy by Deborah Harkness! ♥ Deborah is a history professor and the history parts are so good!

Monique: I vote for Chime by Franny Billingsley. It's gorgeously written and has a wonderful romance.

I think more people should know about this book because it is far better than a lot mainstream Fantasy and is also a great read for those who feel intimidated by thicker fantasy novels. It would make a great movie too. Read Chime!

Naafia: Well, this is a hard choice, isn't it? After staring at my bookshelf and scratching my head for a good long while, I have finally come to a decision.

The most severely underrated fantasy novel there is out there is ...Enna Burning by Shannon Hale! I think that more people deserve to know about this lovely book for the simple reason that everyone deserves a great read.

It's such an excellent book because of Hale's effortless way of weaving a wonderful world with her words; and because it's different in a good way—none of your usual boring or expected fantasy themes here!

Oh, and one more reason: there are at least, like, FIVE potential book boyfriends in it. Need I say any more?

Munira: The Icemark Chronicles by Stuart Hill! The main character is a warrior-princess of note, the romance is sweet and believable and it involves talking snow-leopards, vampires and werewolves who are actually scary and a warlock.

It's undeniably the most underrated YA fantasy series of all time. The second and third books (it's a trilogy) feature diverse characters and it's full of humour.

The first book is called The Cry of the Icemark and you should definitely check it out! It's pretty easy to find at any library since it was published in the early 2000s. :)

Definitely some titles I’ve never heard of and ones I’m keen on trying. Feel free to keep recommending your favourite underrated fantasy novels in the comments section below.

Which leaves me with one more thing to do. Congratulations to the following 3 winners:

The winners of the signed copies of A Court of Thorns and Roses are:

The winner of a copy of A Court of Thorns and Roses or Queen of Shadows (depending on the choice) is:

Congratulations everyone! Please contact me at tammybell78(at)gmail(dot)com to claim your prize. To the international winner please include your choice of book that you’d like me to order for you.

You’ll have 72 hours in which to contact me, thereafter which I’ll select new winners if you haven’t claimed your prize.
Email Post
Labels: book talk fantasy underrated fantasy fiction ya fiction
Reactions: