5 books every child should read before he or she turns 11 + giveaway: Wizards of Once by Cressida Cowell (win a signed hardcopy)

Today I’m super excited to host an interview feature plus a giveaway of bestselling author, Cressida Cowell’s magical new book, Wizards of Once.

The bestselling author of the How to Train your Dragon series introduces us to a wonderful new world in which a Wizard boy with no magic encounters a Warrior girl with magic and chronicles the events of what happens when their worlds collide.
I’m super excited to read it and will be reviewing it later this month.

In today’s post, Cressida shares her top 5 books every child should read before he or she turns eleven – with thanks to PanMacmillan and Hachette for the opportunity to post!

5 books every child should read before he or she turns 11.


The Ogre Downstairs by Diana Wynne Jones
When I was eight I read this book, and it made me realize how wonderful books could be, with wicked stepfathers, and chemicals that make you fly, and magic that feels true.  This is a great one to read even to the most wriggly of book-sceptics.
Harry Potter and the Philosopher’s Stone by J K Rowling
An imaginative tour-de-force that should not be underestimated on the grounds of its phenomenal success. These books gripped the hearts and minds of millions for a reason, and a child who gets hooked on this series emerges at the end a fully-fledged reader with a love of books.
Holes by Louis Sachar
Stanley Yelnats is a young delinquent who is pointlessly digging holes at Camp Green Lake as punishment for a crime he did not commit… This is a tale of crime, redemption and how the past haunts the present, told with exquisite brevity, and with a satisfyingly clever and intricate plot.
Matilda by Roald Dahl
I love Roald Dahl’s creative, irreverent voice, the joyous language, and that dark edge to everything he writes. You feel you are in the hands of an anarchic author who could make anything happen (even a sad ending, as in ‘the Witches’), and that keeps you fascinated, and anxious for the fate of the characters.
The Diary of Anne Frank

Things that happen on screen happen ‘out there’, but in books they feel as if they are happening inside your head. Books are unique in their ability to create empathy, and the terrifying normality of Anne Frank’s diary brings the reality of the Holocaust alive in a way that no film ever can. Lest we forget. 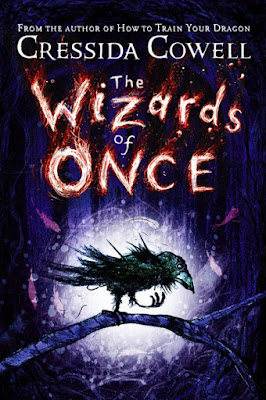 About Wizards of Once:
This is the story of a young boy Wizard and a young girl Warrior who have been taught to hate each other like poison; and the thrilling tale of what happens when their two worlds collide.
Perfect for boys and girls who love fantasy adventure ...
Once there was Magic, and the Magic lived in the dark forests.
Wizard boy, Xar, should have come in to his magic by now, but he hasn't, so he wants to find a witch and steal its magic for himself. But if he's got any chance of finding one, he will have to travel into the forbidden Badwoods.
Xar doesn't realise he is about to capture an entirely different kind of enemy. A Warrior girl called Wish.
And inside this book, at this very moment, two worlds collide and the fate of the land is changed forever.
Xar and Wish must visit the dungeons at Warrior fort, and face the evil Queen.
But something that has been sleeping for hundreds of years is stirring
Add it to your Goodreads TBR pile

The wonderful folk and Panmacmillan South Africa are giving you the chance to win a signed hardcopy of the book. All you need to do is fill out the form below and tell me which fantasy world you’d most like to live in.
Giveaway open to SA residents only. Closes 31 October.